“ One of the highlights of a visit to Tresco, however, is gaining the chance to explore the island’s Abbey Gardens”

The past year seen many people looking for new travel destinations, desperate for a holiday and dreaming of beautiful places to visit, sandy beaches to laze on and tropical gardens to explore. 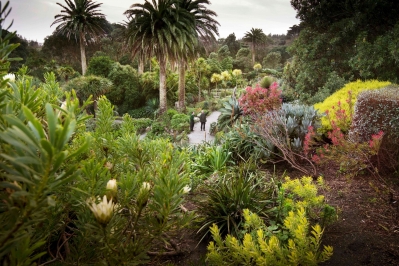 Located just 28 miles off the Cornish coast, with helicopter flights or sea travel from Penzance, you will find the beautiful archipelago of the Isles of Scilly, made up of 200 or so islands, islets, and rocks. Tresco, the second largest island, is just two and a half miles long by a mile wide and provides the visitor with unspoiled white sandy beaches, lush heath and woodland to explore, and a mild climate to enjoy throughout the year.

One of the highlights of a visit to Tresco, however, is gaining the chance to explore the island’s Abbey Gardens, a plant-lovers paradise and home to over 300 plant species from 80 countries around the globe. As the temperature rarely falls below 5o Celsius, the Gardens host the most exotic plant collection in the whole of the British Isles, with plants from South Africa, Mexico, South America, and Australia.

Situated on the sheltered southern end of the island, the position of the Abbey Gardens contrasts with the low heathland and bare rock exposed to the Atlantic Ocean at the northern end of Tresco. 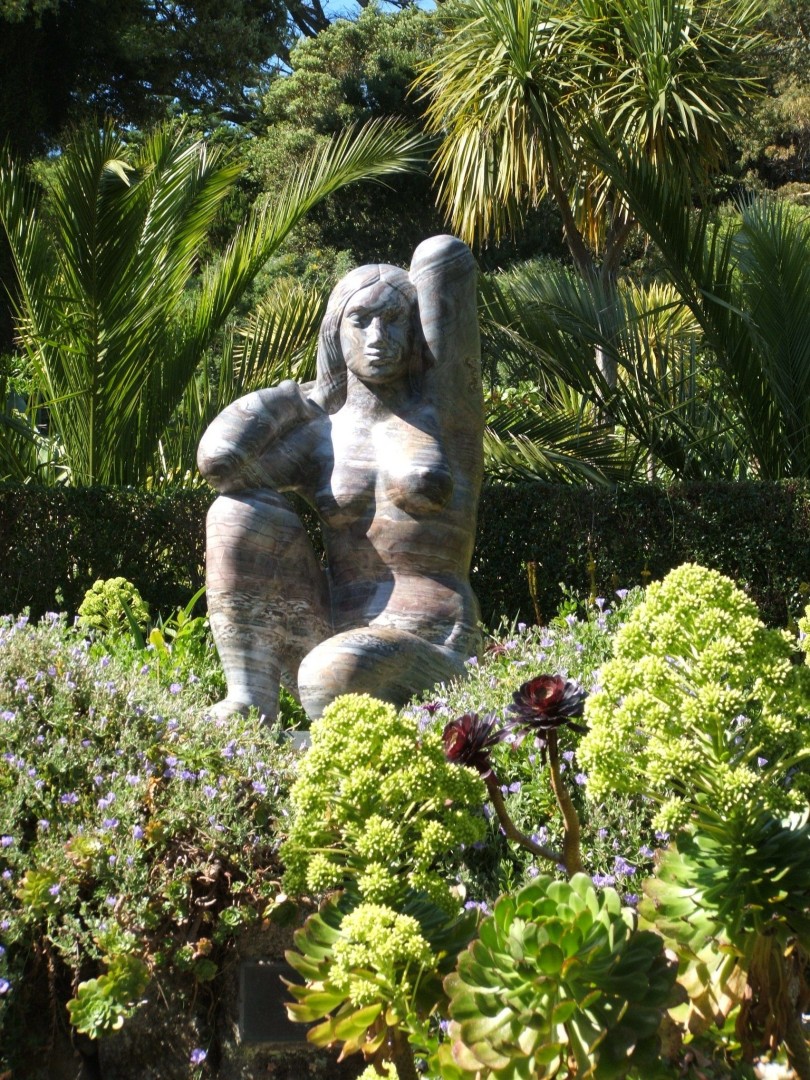 As the name suggests, Abbey Gardens have at their heart the ruins of a 12th century Benedictine priory. Although the Isles of Scilly have been part of the Duchy of Cornwall since the 14th century, in 1834 Augustus Smith, a man of independent means and spirit, took over a lease of all of the islands. He then began to create a unique exotic garden taking advantage of the virtually frost-free environment Tresco afforded. Although little remained of the original priory, a couple of archways and broken walls encouraged the creative Augustus to start planning the garden. He did discover however that the site needed protection from the Atlantic gales, and he created shelter belts to protect his new garden using salt tolerant, quick-growing Californian Monterey Pine and Cypress trees.

As the Gardens developed so did Smith’s horticultural expertise, and he became recognised as a leading plantsman. Drawing on assistance from other influential gardeners, including Sir William Hooker, an English botanist and first director of Kew Gardens, the Abbey Gardens plant collection quickly developed. Since then, five generations of the same family have tended and planted the Gardens.

There have been occasions when climatic disaster has struck: in December 1929, a five-day storm destroyed part of the shelter belt of 600 mature trees; unprecedented snow in 1987 and a hurricane in 1990 also caused immense damage. However, whilst the damage the weather caused was extensive, it also provided the Garden’s custodians the chance to restore, re-plan and replant. 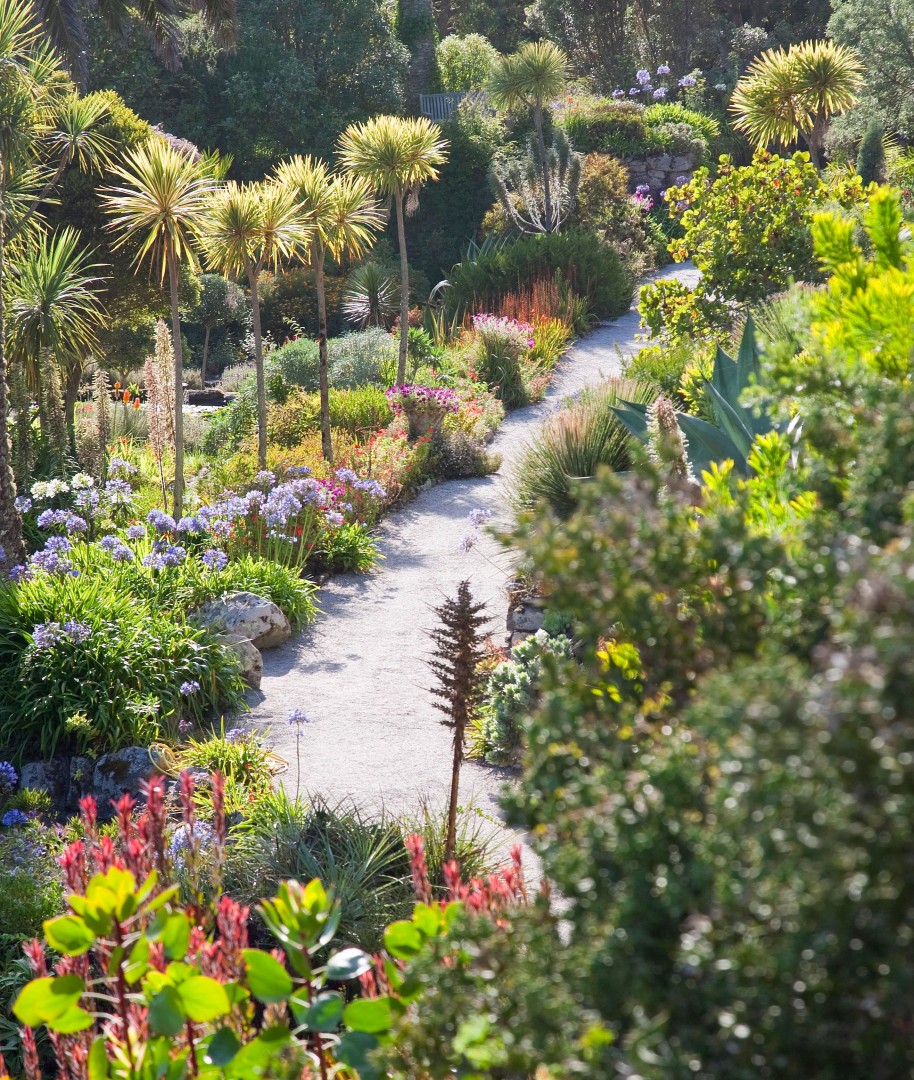 Today visitors can spend time enjoying plants from around the world. In 1991, the Mediterranean Garden was developed with a vista taking you upwards through a bronze archway towards the Agave Fountain. Interspersed between the plants from South Africa, south-east Asia, and Mexico is a water sculpture created by Cornish artist Tom Leaper based on the North American ‘Century Plant’. The Olive Terrace with its purple Aeonium has views out to sea and the island of Samson. This part of the garden is also home to the Shell House, crafted by Lucy Dorrien-Smith.

The Garden is designed with gently ascending terraces; each interplanted with plants from all over the world and dotted with interesting garden sculptures. The Top Terrace is the highest point in the Garden; with its free draining, nutrient free soil, windy conditions and intense light levels, this part of the Garden is perfect for a range of Australian and South African plants including a number of Protea, colloquially known as sugar bushes. The original Long Walk was the first significant development extending the Garden beyond the Old Abbey ruins. Due to its location, and the depth of soil that retains moisture unlike in other parts of the Garden, plants from New Zealand and the Canary Islands grow robustly here. In contrast, the Abbey Hill, on the north and west sides of the Garden provides cover from the salt-laden Atlantic gales which can lash across the island in winter months. Planted with the belt of pine trees, many plants from the Southern Hemisphere and Madeira grow happily here.

The Old Abbey Garden where the first landscaped planting was undertaken by Augustus Smith is planted with a collection of palms from around the world. Large specimens of Doryanthes excelsa (Queensland Lily) with leaves three metres long and five-metre-tall flower heads bloom here in late spring. Augustus Smith also established a unique collection of 30 shipwrecked figureheads from vessels floundering on the rocks around the islands. Since 1870, these have been housed in the Valhalla Figurehead Museum.

The Tresco Abbey Gardens welcomes visitors and horticultural students from all over the world. Together with Robert and Lucy Dorrien-Smith, the Garden employs nine gardeners, including Garden curator Mike Nelhams and Head Gardener Andrew Lawson.

Open every day of the year from 10 am to 4pm, to find out more about planning your visit to the Gardens and Isles of Scilly, visit tresco.co.uk.