“By 1864 when the railway arrived in Stratford-upon-Avon, the cottage had become a magnet for national and international visitors”

“Beauty is Kindness, Selflessness and Compassion”

Located in the hamlet of Shottery – just a mile and a half from Stratford-upon-Avon – you will find the picturesque, thatched house and cottage gardens which has links with the wife of the world’s greatest English-speaking writer and dramatist, William Shakespeare. The house, dating back to 1463, was renamed ‘Anne Hathaway’s Cottage’ at the turn of the 19th century, and is one of the oldest buildings cared for by the Shakespeare Birthplace Trust which took over the property in 1892. Until then, over a period of 368 years, thirteen generations of Hathaway’s had lived in the property.

The Hathaway family that Shakespeare’s wife Anne was descended from, were prosperous sheep farmers. Anne’s father Richard, (an affluent yeoman farmer) left Anne a dowry of £613 shillings and fourpence that would have helped her in the early years of her marriage to Shakespeare. William was just 18 when he married Anne – who was thought to have been 26 – in late 1582. One presumes that the couple would have spent time courting in the grounds surrounding the main farmhouse, but when they married, Anne and William moved into the Shakespeare family home on Henley Street in Stratford-upon-Avon.

The Hathaway family had rented the cottage until 1610 when Anne’s brother Bartholomew bought the freehold of the property for £200. He began a process of extending and modifying the house as his family’s needs grew. Further alterations were undertaken in 1697 by Bartholomew’s grandson John Hathaway. When John died in 1746, the male line of Bartholomew Hathaway died too, and the property was passed to his mother and three unmarried sisters. Eventually, his sister Susanna was the only female descendant remaining. Somewhat poverty stricken, she decided to use William Shakespeare’s fame and association with the property to show interested visitors around the cottage which she continued to do for 50 years. However, having married William Taylor, the Hathaway surname was lost. 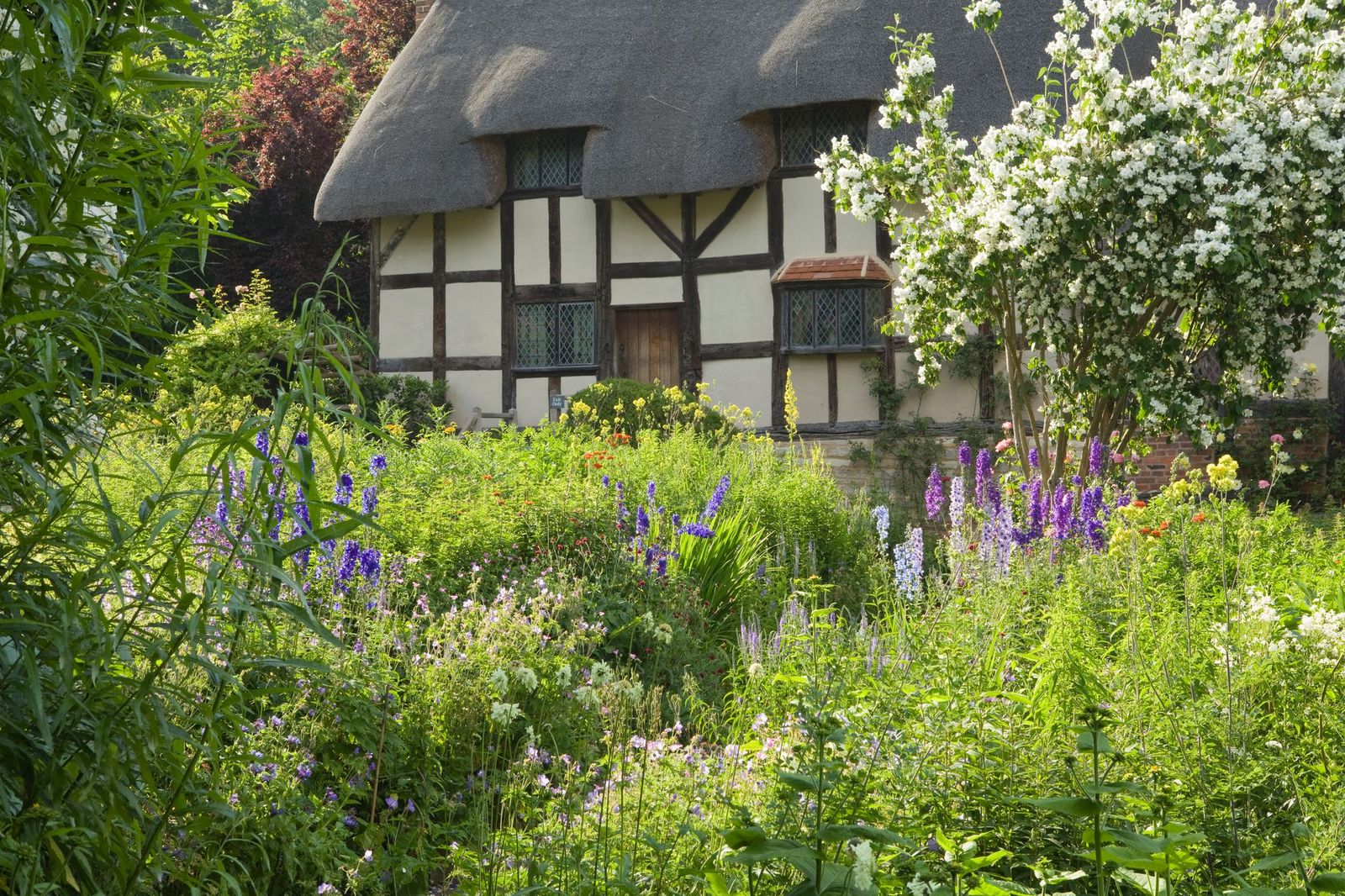 Some years later the next significant woman to have a hand in the promotion of the house and grounds to visitors, was Susanna’s great-granddaughter Mary Baker. During the latter decades of the 19th century, Mary gave tours of her home and nurtured the romantic narrative associated with the cottage and its links to Anne and William. By 1864 when the railway arrived in Stratford-upon-Avon, the cottage had become a magnet for national and international visitors, becoming a popular location for painters and photographers to capture. Mary gave each visitor a personal tour, serving tea and ‘a Shakespearean pork pie’ in the place where ‘Will Shakespeare made love to his Anne’. The volume of visitors increased so much that with time, Mary found it impossible to serve tea to them all. In 1892 when the Shakespeare Birthplace Trust took over the care of the property, Mary remained as custodian until her death seven years later.

By 1911, the Trust reported that the gardens of Anne Hathaway’s Cottage were in a terrible condition. Consequently, by the 1920s, they called upon the assistance of renowned horticulturist Miss Ellen Willmott to give advice on what to do with the gardens. A wealthy heiress, Miss Willmott had gained a keen interest in gardening at her own 33-acre family home; she went on to sponsor plant hunters such as Ernest ‘China’ Wilson and received the first Victoria Medal of Honour from the RHS in 1897. By the time of her death in 1934, she had successfully cultivated more than 100,000 different plant species and cultivars and today there are many popular plant varieties which carry her name.

More recently, in 2016 the Trust embarked on an ambitious project to restore the three perennial mixed beds in front of Anne Hathaway’s cottage in the original style that Miss Wilmott planted nearly 100 years before. As part of a phased restoration, the Trust’s gardens team drew inspiration from the plants listed by Miss Willmott in its archive collection which include varieties of Lychnis, Iris and Centaurea as well as those plants named after her: Scabiosa caucasica ‘Miss Willmott’ and Potentilla nepalensis ‘Miss Willmott’. The project is long-term and other parts of the garden will be restored over coming years, introducing shrubs to the planting scheme to give year-round interest for visitors, as it was originally in 1924.

With current COVID-19 restrictions, Anne Hathaway’s Cottage is currently closed. However, the Shakespeare Birthplace Trust are recommending people visit their website to check which of its five historic site and gardens are open to visitors. To find out further information please visit shakespeare.org.uk.

Desert Hyacinths: Denizens of the desert offer hope for the future

We are delighted to introduce Dr Chris Thorogood – Deputy Director and Head of Science at the Oxford Botanic Garden and Arboretum – who each month, will share with OX a carefully selected plant from the Botanic Garden’s extensive range.