“I think that music is my therapy and I didn’t fully appreciate that until lockdown when the thing I missed the most was singing.”

Actress and singer Clare Grogan has enduring appeal. As an actress, her cross-generational fanbase was established by appearances in both 80s classic Gregory’s Girl, and in the 2010s by her role in the seminal C4 show, Skins.

She has also appeared in shows including EastEnders, Red Dwarf and Father Ted. As a musician, she is best known for her work in the band Altered Images, whose hits included Happy Birthday, Don’t Talk to me About Love and See Those Eyes. Clare has also worked as a DJ on stations including BBC6 Music and Absolute Radio 80s. She has recently recorded new music with Altered Images; the album Mascara Streakz is due to be released in August. In the meantime, fans can catch Altered Images at Cornbury Festival this summer.

The world – it’s pretty hard not to feel a sense of grief in terms of everything that’s going on in the world that we’re constantly bombarded with. To not be affected by that is almost impossible. It’s important to get perspective but it is hard at the moment, particularly with young ones in your life.

The world again, because of the number of people that are united in their desire to create good things out of a difficult time. We’ve seen it right across the board. With the pandemic, for example, I didn’t know my neighbours very well before but just a hello over the fence of a glass of wine makes me rejoice in human nature.

Social Media. It is one thing we didn’t have to think about as teenagers: the scrutiny still existed, but now there’s lots of hiding behind screens which is really damaging. As a society we need to think about that.

My life. I go through phases of being in the limelight and not, and when I am more than usual it makes me think about what I did as a 17-year-old. People ask me about that time a lot, so I reflect and I’ve come to have a great respect for my younger self. I was so brave, and didn’t realise it at the time. The beauty of youth is how fearless we all are. I’ve really tuned into that to create the new album.

Singing – I think that music is my therapy and I didn’t fully appreciate that until lockdown when the thing I missed the most was singing. I realised it was such a big part of my personality. I absolutely love singing. Over the years I’ve treated my voice with respect so I can keep going.

Child poverty in the UK, and everywhere else. It’s a toss-up between that and period poverty, which is distressing in a modern world but the two things are tied into each other. We’ve come to normalise food banks and that’s really upsetting. I’ve worked in my local food bank and we all feel ‘this world is rich, so how did we get here?’ There’s always going to be division but the divide has got so extreme and it’s our young people who are suffering

A lot of things! I’m a very excitable person.

At One with the World?

I never feel this…there is too much inequality. I have moments of genuine peace in my life and it usually just involves being at home. It sounds a bit clichéd but watching a great movie with my husband and my daughter, and feeling that amazing contentment that I’ve got all this in my life. For all the fancy schmancy stuff in life, it really does come down to the simple things.

Billed as ‘The Last Hurrah’, the last ever Cornbury Festival will be taking place between 8 – 10 July 2022 and as ever, will be filled with music, feasting, comedy and glamping. Headliners include Bryan Adams, James Blunt, Ronan Keating, The Darkness and Jools Holland with his Rhythm and Blues Orchestra. Clare will be on stage with Altered Images on Sunday 10 July. 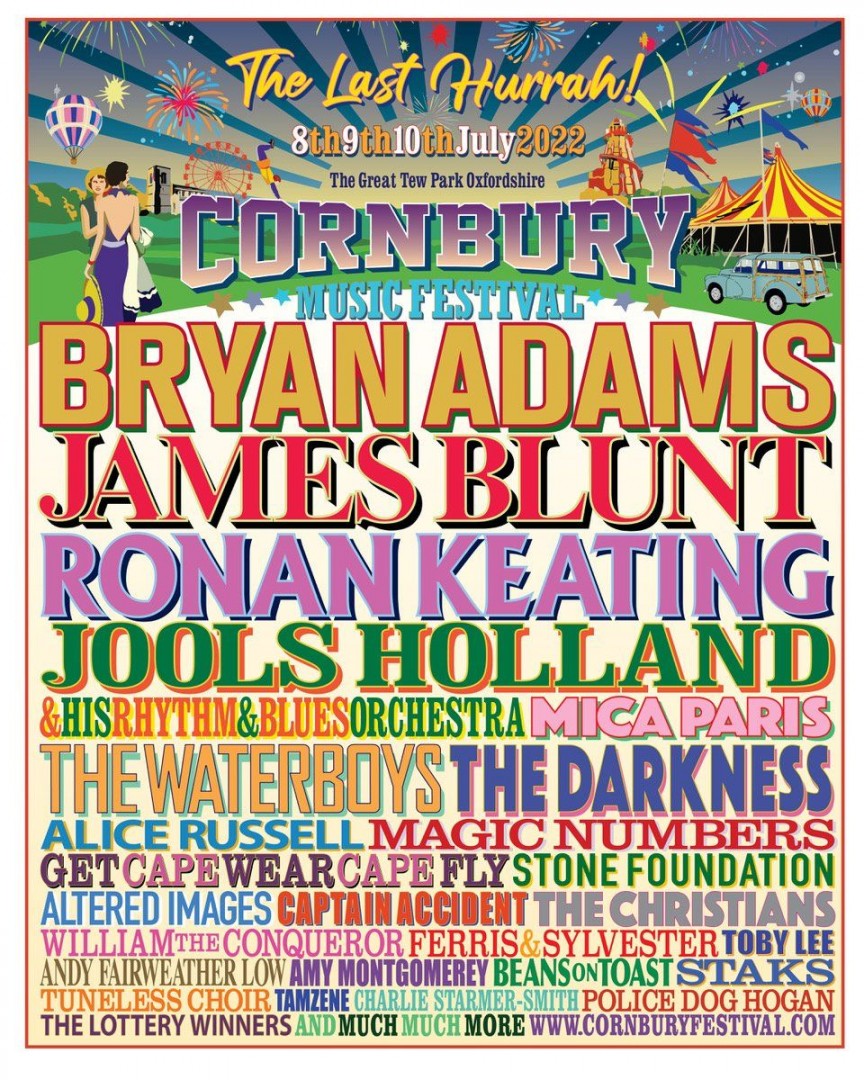