The Hare of the Vale

“I missed him terribly WHEN he LEFT, but he's now enjoying part of the trail at Longcot's Farmer Gow's, where anyone can go and sit with him AND enjoy the VIEW over to White Horse Hill...”

As part of a public art trail that’s great fun for all the family this summer, a number of five-foot hare sculptures and litters of leverets are scattered across West Oxfordshire, each individually decorated by a local artist.

Artweeks Festival Director Esther Lafferty talks to Jo Marshall, the artist and ceramicist behind the Hare of the Vale, whose coat is glossy with legendary local landmarks.

“I grew up in Oxford and one of my most vivid memories is visiting the Uffington White Horse as a small child and standing on the eye – although they ask you not to stand on the chalk these days. I’d never been anywhere else like it and I remember thinking it was the most magical place on earth. It was a special family day out with my grandmother and uncle, all of us crammed into the car, and I was probably on the parcel shelf. There was no one else there except my family, and I felt as if we’d discovered a secret place. We had a picnic and we rolled down the hill carefree. It was bright sunshine and so in my mind, that’s how I always imagined it. There’s something about the hill and the views that strikes a deep chord. Up on the top, you have the iron-age earthworks of Uffington Castle, The Manger and Dragon Hill below you and then the flatter Thames Valley rolling away into the distance. You feel truly grounded in the landscape and its ancient history. It’s a stunning view and an incredible place.

“When I moved to Uffington, after a few years as a graphic designer in London, there was a horse in the field next door that belonged to a local potter. I had three small children by then, so I took pottery lessons almost as therapy to give me a release from the everyday practicalities of family life. It was heaven, and sometime later I bought a potter’s wheel and a kiln and other bits and pieces from another local potter who was retiring. They were ancient, but they were just what I needed to keep my creative side inspired, and after that I spent as much time as I could in the garage.

“There’s something amazing about taking a blob of mud that’s literally come out of the earth and making it into something that’s useful and beautiful. I loved it immediately and I still find it just as exciting fifteen years later.”

Jo’s pots are highly decorative, functional pieces in a stylish colourful palette, in which a light midnight blue, a cheerful turquoise, soft sunshine yellow, and a harmoniously peachy sunset feature strongly. These colours are inspired, perhaps, by the light at dawn and the colours of dusk and twilight hours. “They’re the most expectant times of day”, she explains, “when you are likely to see most wildlife.”

“I became one half of a pottery known as the Uffington Potters, designing mugs, platters, jugs and teapots with, at first, polka dots, ladybirds and bees. The hare was always there in the back of my mind waiting to get out, but it took time to develop the ‘paper resist’ techniques I now use to present him on pottery. I use lots of layers of coloured slips and for each individual animal or decorative motif which I carefully handcut from paper and stick to the surface to resist the application of slip or glaze. Then the design stands out the colour of the layer beneath. It’s very labour-intensive, but it’s a labour of love.

“I have always been very drawn to hares and this part of the Vale, and White Horse Hill in particular, is one of the best places in the country to see hares. If I was in Philip Pullman’s Northern Lights (or The Golden Compass film), my daemon would definitely be the hare. He’s such a beautiful animal. I love his free-spirited and elusive nature. They are becoming more of a rarity so it is a real treat to see one, and when you do, there’s this wildness about him – or even that madness of the March hare – paired with a confidence which is an unusual quality in British wildlife. He won’t come near you, but he isn’t scared away by you either.”

Alongside the hares, in her new garden studio in Grove, Jo also creates pieces with random abstract sgraffito designs, in which she scratches through the top surface of the slips to reveal a lower layer of a contrasting colour. These are each an emotional response to events, each ‘mad platter’ a Wonderland journey with paths leading in different directions. But her boldest step to date, artistically, has perhaps been the painting of a giant hare.

“I was so excited to hear that the Cotswold Hare trail was edging into the Vale, with several sculptures destined for Faringdon, and I was delighted to be given one of them to paint. I’m used to decorating 3D shapes, but this was rather a challenge, although I knew immediately what I wanted to include: White Horse Hill in the design and other features of the Ridgeway landscape including Wayland Smithy and The Blowing Stone.” The historic landmarks all have fascinating legends attached: Wayland’s Smithy is believed to be the home of the Wayland, the Saxon god of metalworking. It is said that if you leave your horse overnight and place a silver coin into one of the holes in the large stones, your horse will have new shoes in the morning. The Blowing Stone was said to have been used by King Alfred to call his troops to fight the Danes.”

“White Horse Hare took 5 weeks to paint, and it was great fun to do. He has the Ridgeway running up his spine, and I included a green dragon sleeping curled around the bottom of Dragon Hill, as well as a tiny hare scampering past. I chose autumnal colours and a night sky with a sprinkling of stars across the ears, because he’s a moon-gazing hare. At five feet tall, he took up a whole bedroom (admittedly a small one) and was rather unwieldy. I felt like I was dancing around him the whole time, except when I was trying to paint the hard-to-reach spots, like between the front legs or under the ears. I missed him terribly when he left, but he’s now enjoying part of the trail at Longcot’s Farmer Gow’s, where anyone can go and sit with him and enjoy the view over to White Horse Hill.”

And maybe, just maybe, if you have strong-enough binoculars on White Horse Hill, you’ll be able to spot him looking back. 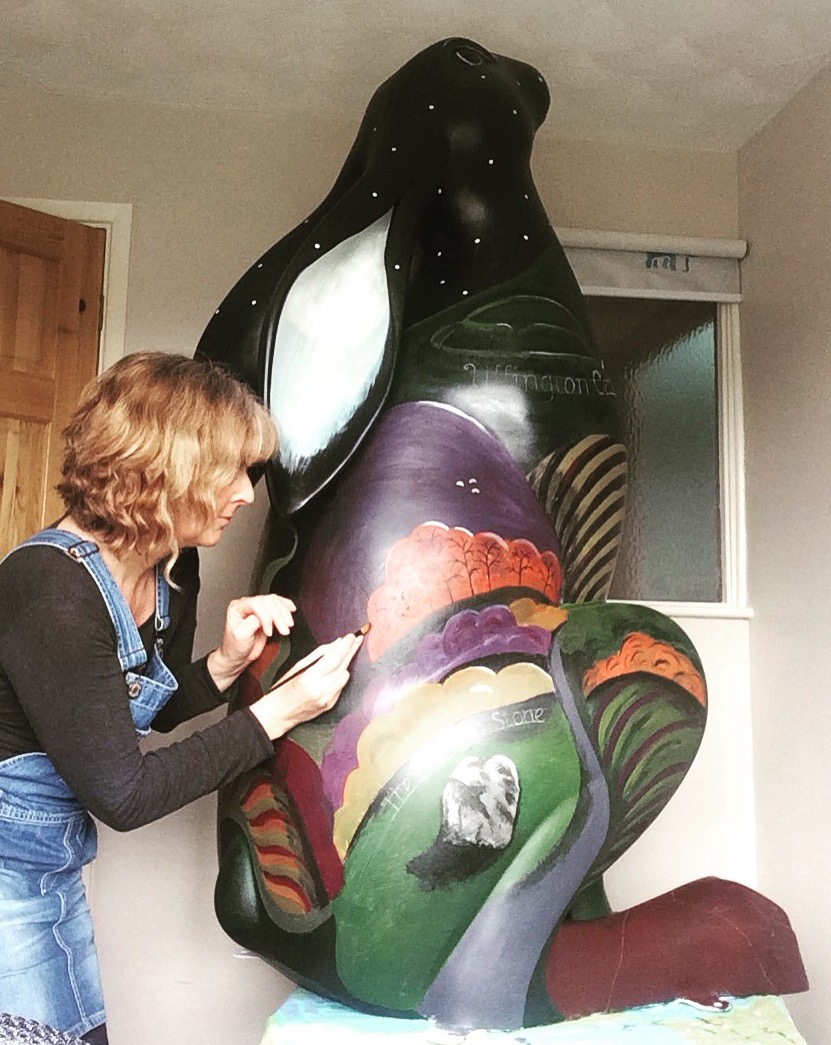