Will we have rainbows day after day?

For ten years, The Smiling Sessions have offered participatory, high-quality singing experiences for senior citizens in care homes in deprived areas of London, helping them become more integrated and stay healthy and active. Now, in these unprecedented times, they are keener than ever to harness the power of music and singing to support wellbeing and mental health. “It’s a very moving, rewarding project,” says Alison Jones, cofounder of The Smiling Sessions, recalling the faces of residents saddened that the initiative would not be continuing in a physical capacity due to Covid-19. “I spent a couple of weeks,” she says, “thinking, ‘how are we going to keep reaching out and connecting with these lovely people who are probably more isolated than everybody else?’ We had to learn very quickly about the digital and technical aspects of doing that.” Her colleagues Pete Baikie (cofounder, vocals, guitar) and Neil Herd (vocals, guitar) are better equipped than she is in that respect, the violinist admits, and they brought on-board video editor, Oliver Parkin for the weekly Smiling Remotely Sessions. Having received financial support from emergency Covid funders and the Arts Council (“a long-term supporter of our work”), the team are also raising money to buy iPads and tablets for care homes and isolated communities to enable them to join in with the weekly virtual singalongs. Thus far these sessions have starred celebrity guests such as Clive Rowe, Basil Brush, and a certain somebody else with a rendition of ‘Que Sera, Sera’… “It’s madness here,” La Voix tells us down the phone, “we’ve got some work outside the house and it’s incredibly noisy – and the washing machine’s going. Domestic bliss...” 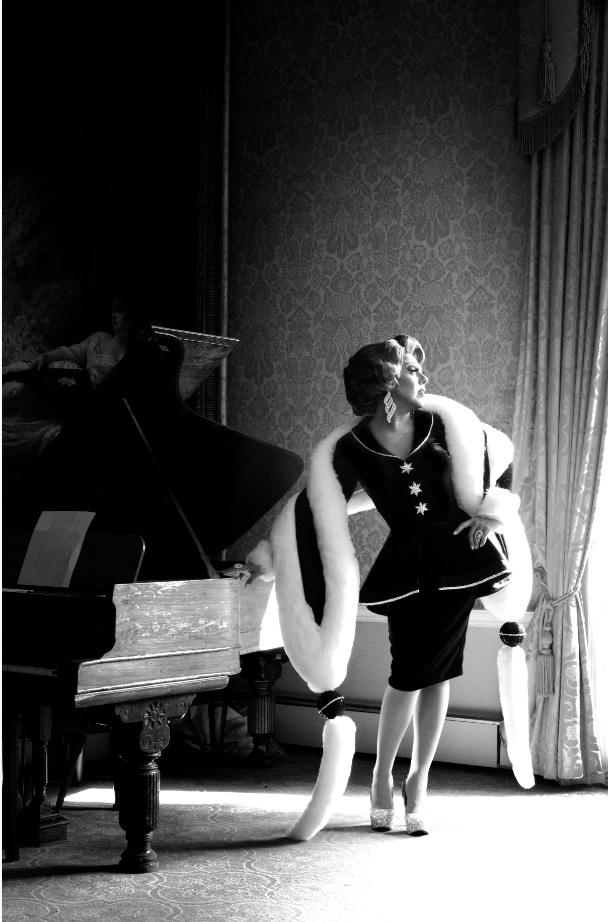 What was the last live gig you did?

Before the lockdown thing, we were full swing with my UK’s Funniest Redhead tour. We did Theatre Royal Brighton – packed, sold out, social distancing wasn’t even a thing back then, amazing night – and that was the Saturday… the theatres closed on the Sunday. So technically I think La Voix closed down the theatres (I’m hoping that’s not the case.) I do a lot of cruise ships as well – the cruise ships and theatres were the first things to go. You’re in tour-mind – you’ve got your trundle packed, travelling clothes on – and then all of a sudden you’re cleaning out your kitchen cupboards. It wasn’t quite the plan.

You’re a big name, very popular, but at the end of the day you are a jobbing performer for whom the Covid situation must be a challenge.

Absolutely. There’s sometimes a big misunderstanding with the arts where people think we all live in huge houses and drive flash cars – the life of luxury. But with my show, everything I earn I plough back into the show; costumes, feathers, merchandise, I have a four-piece band and sound crew. It all costs an awful lot of money so you’re constantly investing back into the business (it’s show business for a reason). Some of the costumes I was wearing at Theatre Royal Brighton, I hadn’t paid for yet. To have all that investment and then not have the show is a big worry for any artist.

And of course usually there’d be all the Prides for you to play.

I know! When I was younger, there was London Pride and Brighton Pride – all I remember. Now they’re everywhere. I have my dancing boys and costumes made specifically for Pride Season. Still now, when I’m touring, I try and get in as many as I can. I’ve been lucky to go abroad; Amsterdam Pride, I did Malta Pride last year which was amazing. You don’t realise how much you miss that sense of community and celebration. Some people don’t think Pride should be a party, I’m the complete opposite, I think it’s got to be an absolute celebration. The whole aim of a Pride is that anyone on the outside looking in sees a perfectly normal, fine and happy event. And if you can dance in the face of hatred, what better way of throwing it back at them is there than showing we’re having a good time?

It’s going to be hard for queer people not having those physical celebrations.

I think so. What’s going to be good though is when the Prides do come back, they’re going to be bigger and better than ever.

And their digital presence will be stronger, because Pride organisers have had to truly get to grips with that this year – have you been embracing the digital?

Well, it’s lovely to see you’re a big follower of my page if you’re asking that question... darling, I’ve done everything you can imagine. I’m a terrible cook and I thought, ‘I can’t cook but I’m quite interested – maybe this is the time I learn.’ My good friend, Rosemary Shrager – who you all know from Ladette to Lady and ‘the jungle’ – said ‘I’ll teach you.’ So, every Wednesday at 6pm, she’s cooking in her kitchen, I’m cooking in my kitchen. I’ve got to keep up with a professional chef and the results haven’t been too bad. What’s lovely is people at home have been cooking along – I’m loving it. I did some isolation cabaret shows with my live band, I’ve been doing makeup tutorials – what more can you do? I’m not singing to a backing track in my kitchen – I’ll leave that to Sam Bailey.

Are you sticking to a routine – up and dressed every morning?

I try to keep to a routine but not make every week the same – I can’t stand that. Obviously my shows and social media stuff is quite scheduled but I like to vary it up completely. I don’t lounge around doing anything too casual, it’s really important to get dressed up even if you’re not going out. Put your nice clothes on, put some makeup on, do your hair, even if it’s just for yourself.

You appeared in Absolutely Fabulous: The Movie in 2016 – was there a bit of you that thought: ‘I can retire now, I’ve made it.’?

I’ll never forget getting the phone call. I was in Gran Canaria, I’d just done Pride, it was late and my agent rang me. It was this message and all it said was ‘call me immediately, don’t drink tonight.’ (She knows I like a tipple after a show.) I rang her, she was like ‘they want you for the Ab Fab movie, they’re flying you home in the morning, you’ve got to go to the studio to record the vocals (I sang ‘Poison Arrow' by ABC when Saffy’s walking into the RVT). I remember being thrown onto this flight back the next day, straight into the studio and this guy had these amazing golden discs all around the room, Jane Horrocks stepped out before I went in, and you’re there thinking ‘oh my God, this is surreal.’ Cut to filming day, you’re with Jennifer Saunders and Joanna Lumley – all these people you’ve grown up with – it was so surreal but so lovely and such a family; you felt instantly welcomed and connected to them all. 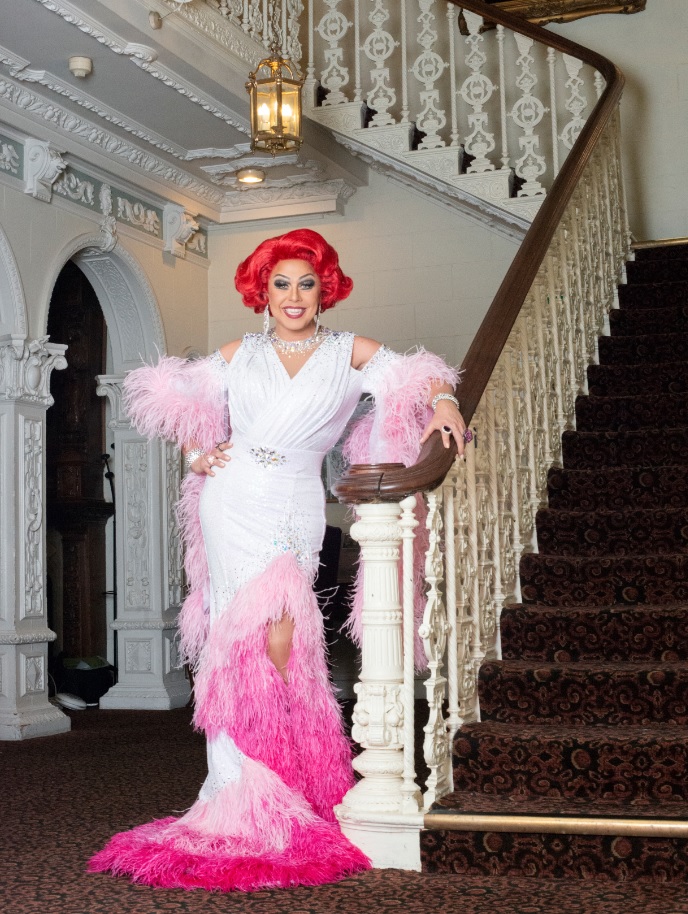 Did you meet Kate Moss?

I didn’t do any of those filming days. I have met Kate Moss, this is a story for you… When I used to work at Heaven, I was on the door doing the VIP guest list every Wednesday night. I was very young and naive and this woman clacked towards me and said ‘hello.’ It was about 2 in the morning, I was cold…

Then of course I stupidly pretended to look at the clipboard like I was trying to find the name. The manager lifted up the rope and said ‘I think we’ll let her in, don’t you?’ I was mortified.

What’s on your post-lockdown radar?

As soon as the theatres start to open, I’m back on that road. I’ve got my contract with the fabulous P&O, they’ve just launched a brand new cruise line, I’m doing the maiden voyage of that. And of course, fingers crossed, I’ll be going into pantomime back at Aylesbury Waterside, playing Fairy Godmother in Cinderella.

You’re a staple of the Aylesbury panto now.

I know, who’d have thought Aylesbury would become your hometown when you become big? It is the most wonderful theatre and family of staff who work there. The whole town and beyond have just embraced me – and Andy Collins, we’ve been in it ten years and it’s just wonderful, like going home every year. Because a lot of my tour is me on my own, it’s lovely to suddenly be part of a company, sharing the jokes. Not many people say this, but I find pantomime a bit of a rest compared to my solo touring. Once you walk on stage in your own show, you are carrying that baton until the end. With pantomime, at least I can come off stage and have a breather for five minutes while there’s another scene going on. 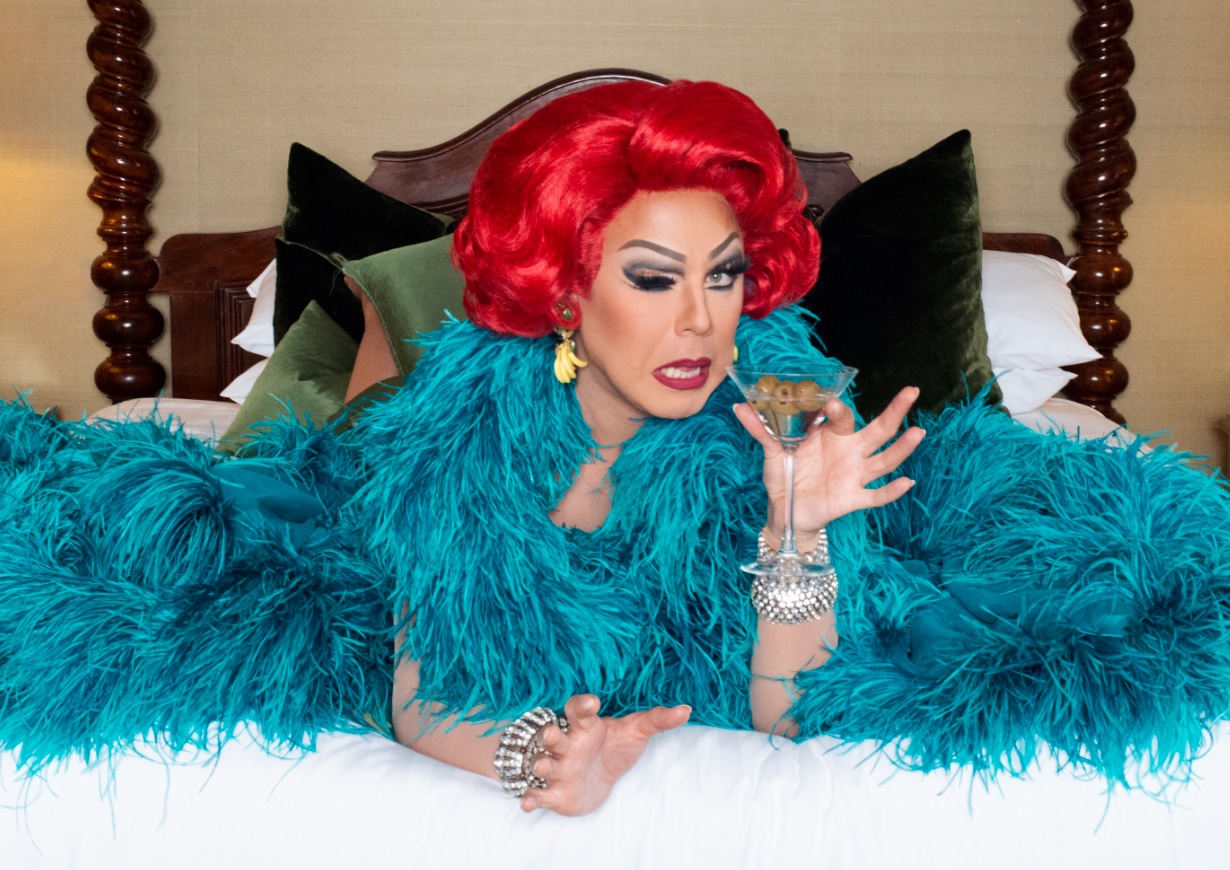 Do you have different preparations depending on what type of gig you’re doing?

Mainly it’s always vodka. Vodka cranberry is the best preparation whether you’re doing the Royal Family, the Palladium or Pride. Do you know what I’ve learnt in my line of work? Whether you are dressed up in black tie for the most formal corporate event, or at a shindig in a garden, everybody just wants a good time, a laugh and a bit of a dance. I don’t want to do politics, I don’t want to do intense Q&As, I just want people to be entertained. @lavoixtheshow

Visit shapeshifter-productions.com for more on the Smiling Sessions and the Smiling Remotely App, making access to their song video library really easy for carers and staff.