“Feed the birds – food is getting scarce in February ”

Have you been hibernating indoors? It’s certainly tempting during the dreary grey days of January. When you look out of your window even nature seems to be sleeping, and it can be tempting to crawl back under the covers but in that bed of leaves outside, there are busy creatures shuffling around in the dry crackle. In the silent woods, pillowy with snow, are majestic animals stepping between the stark, sculptural tree trunks. No drowsy lie-ins for them, they’re alert to the sharp crack of a twig or an unfamiliar scent. And against blank, sheet-like skies, are the soaring silhouettes of birds which have travelled hundreds of miles, snatching sleep on the wing, to reach the milder winters here.

Even squirrels don’t hibernate in the UK, so what’s our excuse? Winter can be a wonderful time for wildlife-spotting, it just requires a little effort of will to get togged up and out of the door. I know that I always feel so much better when I’ve been out and having that added incentive of looking for wildlife – or signs of wildlife – can make it a more interesting stroll.

Whilst squirrels don’t actually hibernate, they do spend cold weather curled up in their winter dreys. You can see these football-sized nests, usually high up on a strong branch near the trunk. They’re made from twigs and lined with dry grass, shredded bark and moss. You may spot squirrels when they come out to forage for the nuts they’ve scatter-hoarded amongst the trees of their territory. But – unless you’re a dog – squirrels aren’t a particularly high-value wildlife spot. 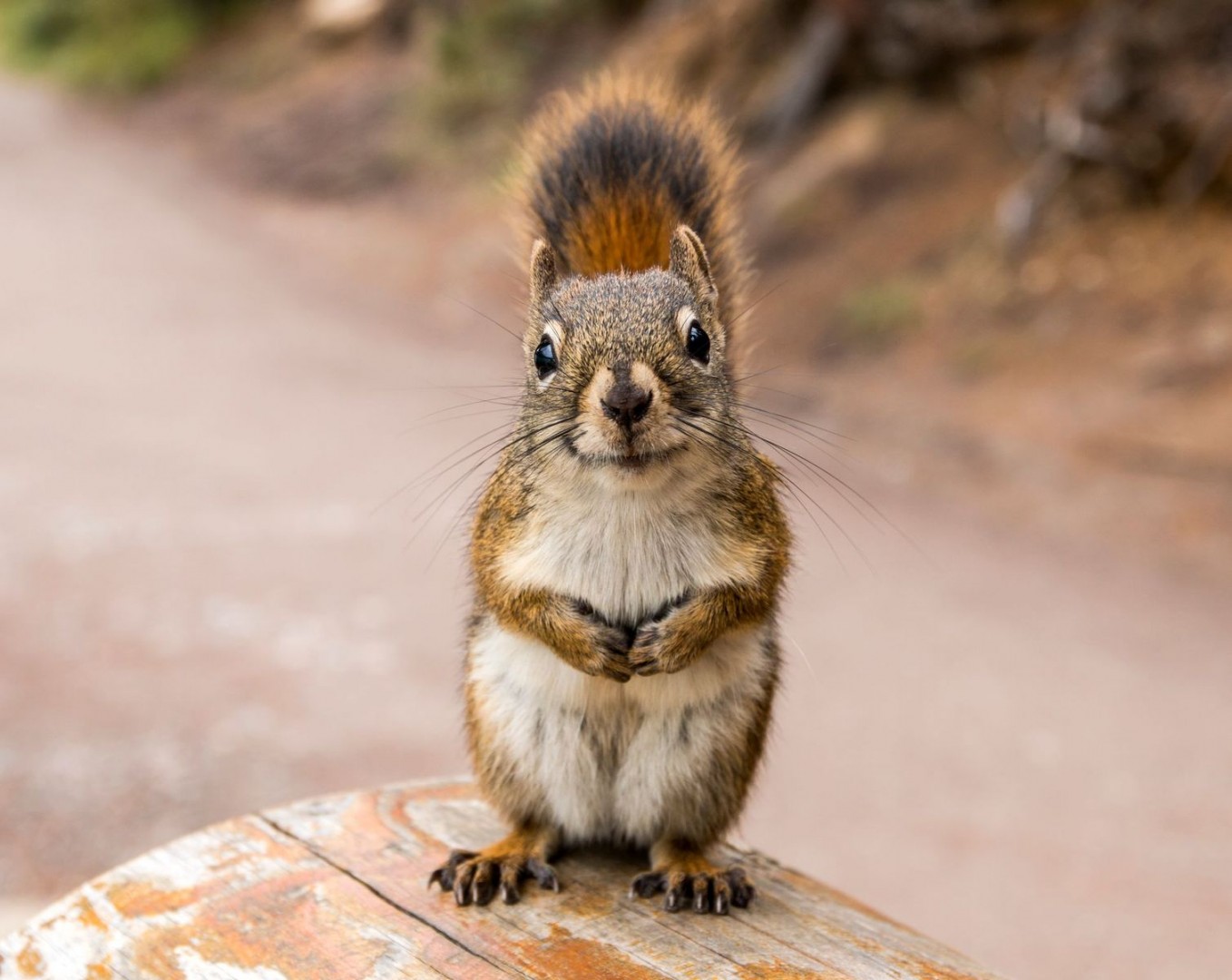 Sharing the woods with them are a more thrilling prospect; deer. They’re shy creatures but are easier to spot in winter when there’s no foliage on the trees. Oxfordshire is home to three of the six types of deer in the UK; the medium-sized roe and fallow deers and the little muntjac. The muntjac is easily identifiable – though can be mistaken for a dog at a distance. They have chunky, round-backed bodies with slender legs and are usually alone. I’ve usually seen them snuffling around the undergrowth at the edge of a copse. They freeze rather comically, avoiding your eye as if not locking eyes with you makes them invisible.

Roe deer are pale brown in winter with black noses and a pale rump. The males have little antlers with up to three points and may be seen in small groups at this time of year. Fallow deer are more sociable and will usually be in herds. In winter they’re dull brown or even black and the males have big antlers. Deer are very common in Oxfordshire and the best place to see them is near woodland edges at dawn or dusk, possibly at Badbury near Faringdon or Greys Court near Henley-on-Thames. 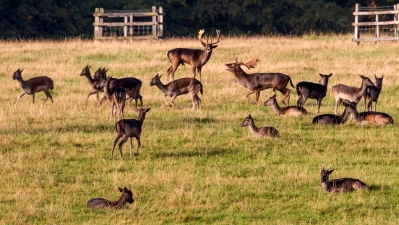 My most exciting encounter with a deer was on a morning run. One minute I was jogging along, lost in aimless thought, the next I was sprawled on the ground, staring into the wide, shocked eyes of a fallow deer. We’d collided as it leapt the fence between wood and field whilst I was running alongside it. Neither of us had seen the other until it was too late. We seemed to startle-stare at each other for ages, though it can’t have been more than a second or two before it gathered its spindly legs together and bounded away. It was a magical moment (with fortunately no lasting damage to either of us).

I hope you don’t get quite so close and personal, but even if you don’t see the actual deer, the soft mud, frost and snow of winter is great for spotting their footprints. Deer essentially walk on tiptoe, so their prints are two long toe prints – like two orange segments side by side with the flat edge innermost. Dainty muntjac prints will be around 3cm long, Roe or fallow more like 8 or 9cm.

There are other shy creatures, best tracked by the signs they leave behind. Most of us know what a dog paw-print looks like. Badgers’ are of a similar size and pattern, but there will be five toe prints instead of four. They are creatures of habit so you might be able to track their route from their foraging ground to their sett along a straight, well-worn path.

Other paw prints to spot are weasel and stoat – they show five round toes in a splayed-out shape. Rats and water voles have pointy star-shaped footprints with hind feet that are longer. If you’re by the water, say by the lakes at Stowe, you can tell duck and geese tracks by the webbing between the toes.

Wading birds like moorhens and coots don’t have the webbing and tend to strut along like a model so the prints are one in front of the other, not side by side. People often get confused between coots and moorhens, both being black river and pond birds. The thing to remember is that coots have a white face and moorhens a red one. 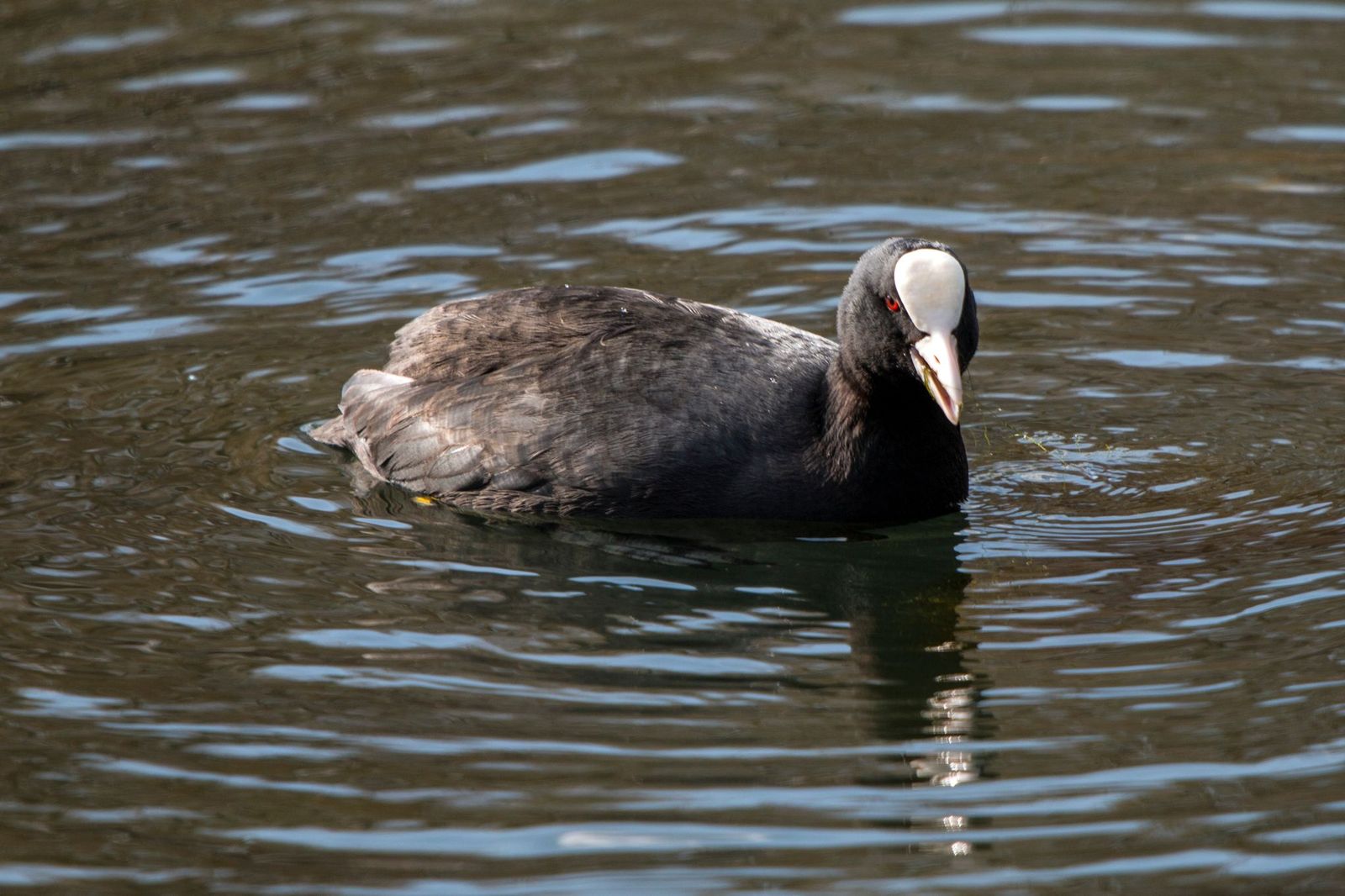 Some visiting birds to look out for are redwings, waxwings and fieldfares who wing their way over from Scandinavia and Russia to feast on our berries over winter. Waxwings are quite distinctive with their little head crest and black, white and red markings.

They’re maybe for more dedicated bird watchers though. For the rest of us who are just after a bit of interest on a walk, there’s nothing like watching the red kites soaring and swooping from the top of a hill. Watlington Hill, just off the M40 at J5, is perfect for this. I’ve even seen ravens there, tumbling and rolling on the thermals – it really looks like they’re enjoying their play. You can tell a raven from a crow by their size – they’re big, similar to a red kite. They have a thick shaggy neck, big bill and long narrow tail. They also make the strangest ‘cronking’ sound, a bit like a loud frog. 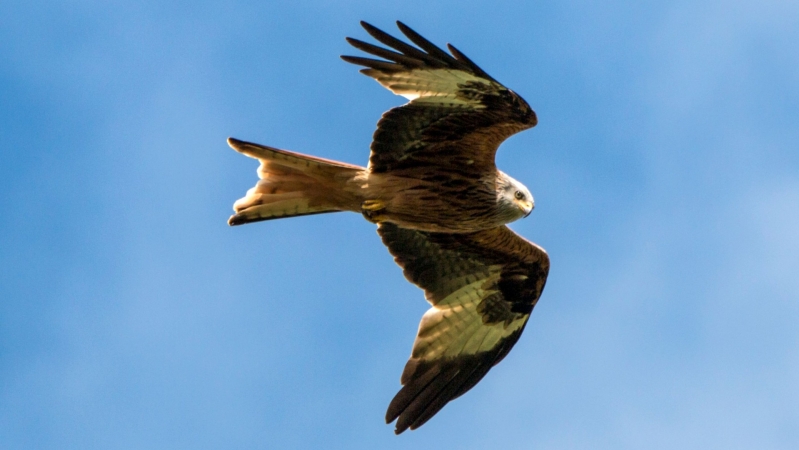 The most important thing, as ever, is simply to get out there and pay attention to what’s around you in the stark beauty of the winter landscape.

All images provided by Hugh Mothersole for National Trust

How To Help Winter Wildlife In Your Own Garden

If you are unable to get out into the countryside, here are some top tips to help the wildlife in your own garden...

When it comes to creating a contemporary garden, forget about flowing, sweeping borders and well stocked highly colourful flower beds. Instead, work on the principle of ‘less is more’ and use a ruler and set square when drawing your plan out on paper. Being creative with stylish colour schemes in shades of grey, dark blue or even black, hard landscaping, lighting and planting you create an outside room to be proud of whilst adding value to your property.

Colour in the Garden

There are lots of ways to use colour in the garden to suit everyone’s individual tastes, but there are a few simple rules that will help you to create a huge amount of impact in your border planting.

Why are trees so magical and why do I love them so much? As a child I loved nature, climbing trees, and enjoying our countryside. I especially remember the ancient oaks at Blenheim Palace and the fun of measuring their girth to age them; standing inside some of the hollow trunks and trying to imagine what history the trees would have seen. So, my love of trees started at an early age.