“The biggest impact wasn’t from what I said, it was the fact that I wore a hijab”

In May 2019 BBC Breakfast dedicated a week to raising awareness on menopause and I was one of a panel of women invited to join in the discussion on air at Media City. In the lift up to the studio, I got chatting to a friendly young woman, who was also due to appear. We kept up a loose connection through social media and over the years I have seen her become something of a phenomenon. When we were brainstorming ground-breaking women to interview for this issue, I knew who was first on my list to approach. Meeting again over Zoom, I start by apologising for the fact that, when we met, I had no idea ‘who she was’ and thankfully, she laughed…

“Up until then, I was a jobbing GP who tweeted about Asian women and the menopause. I had done a 10-minute interview on Three Counties Radio and my tweets were mainly aimed at other doctors. At that time, there was no ethnic minority voice around menopause that I knew of in medicine. I was on maternity leave and had thinking time. My sphere of knowledge was my clinic and I spoke with other women who had no idea that what they were experiencing was menopause. Now, the conversation has changed but even two years ago, there was little acceptance of menopause. When I did BBC Breakfast, I genuinely had no idea that anything further would come. I initially said I couldn’t do it - I had a five-month-old, and I was breastfeeding – I had a life to get on with! However, Lisa Kelly (Planning Editor) said don’t worry we’ll do your make up and bring your kids, we’ll handle it. So, I agreed to go on – to be honest, she had me a ‘we’ll do your make-up’.” 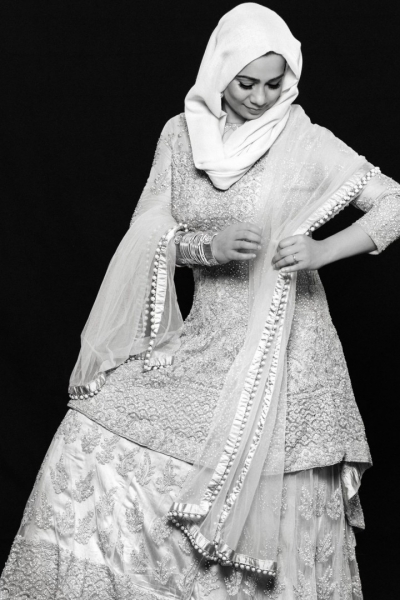 And now, you are everywhere.

I had 800 followers on social media before that first appearance. [Dr Arif now has 16.6k followers on Instagram, 21.4k on Twitter and 178k on Tik Tok, in addition to regular appearances as Resident GP on BBC Breakfast and ITV’s This Morning and hosting the Sunday Breakfast Show on BBC Three Counties Radio]. The biggest impact wasn’t from what I said, it was the fact that I wore a hijab and as a Muslim woman I was openly discussing vaginal atrophy symptoms at 8:30am. I am very aware that when I go into a room people see the headscarf first – I went to the Hello Awards and didn’t realise there would be a red carpet and all that. I thought I’d just be with ITV’s This Morning team, but the photographers were like ‘and who are you?’ Being visible is a way to break this, a change has to happen. It’s still true that in certain roles, Muslim women aren’t seen. Yes, there was Nadiya Hussain, but she came along eight or nine years ago. So, increasing awareness of diversity is a huge issue; young girls sitting at home who look like me aren’t widely represented on telly.

That said, I never feel that success is ‘being on telly’; success is providing solutions that allow people to move forward and there’s nothing better for me than a woman coming to the surgery, saying ‘because of your TikToks, I’ve realised that I have vaginal atrophy and now it’s been treated’. I think we can forget the powerful connections these solutions can provide.

I promise I’d ask this of a man who held as many roles, but how do you manage your time – I’m avoiding using the term juggling as it’s only ever applied to women, never men.

Everybody wears different hats - let’s not talk about juggling! We now live two doors away from my parents and the mosque and I’m grounded in the community. I can go off and do the other things [media] because I’m supported. I am so lucky that I have so many people around me, and the biggest tip I can give to anyone; surround yourself with the people who will look after you and drop the thoughts of others.

Which takes us nicely back to social media. It can be a toxic place, but surely also a force for good?

It is a learning curve – yes, saying social media is bad is a lazy narrative. Of course, I’m there because I want people to listen to my message. I don’t mind people disagreeing, but I block and mute if they’re toxic. If they ask why I am promoting vaccines I say I have personally seen patients suffer, so give me a solution other than the vaccine that will prevent loss of life. I’m sticking with science on this one. There comes a point when you need to start muting.

Yes, I want the attention, but the reason is (as highlighted nicely by the pandemic) doctors have always been sort of otherworldly beings, like Martin Clunes as the grumpy village GP in Doc Martin. That’s just not the case; we’re moving with the times and knowledge is shared. I joined Twitter in 2011 but I was not really active, then in 2019 I was at home with my third son who was a baby and that’s when I started posting more regularly. What we (medical professionals) need to do is educate our patients – so often they don’t know simple things about their health. Some doctors think it's beneath us to go on social media, but we need to educate and communicate using a link to lay people, like TikTok and Instagram. Myths form and, if they’re not corrected by fact, they grow.

For example, in surgery, what takes the longest time is trying to explain what menopause is, what a period is, or what vaginal discharge is…I think doctors have missed a trick in not harnessing this way to communicate more widely. I got a lot of stick from professionals: ‘TikTok is for 16-year-olds showing their midriff’. Even my sister was surprised when I told her I was doing TikToks about menopause. I uploaded a couple of videos, and they went viral. I think the biggest mistake we make as educators is to assume that some people may not be ready to know something – there’s the idea that learning about the menopause is for later on in life. That’s simply not true, people want to be given evidence-based information in a way that is fun, interactive and that they can understand. 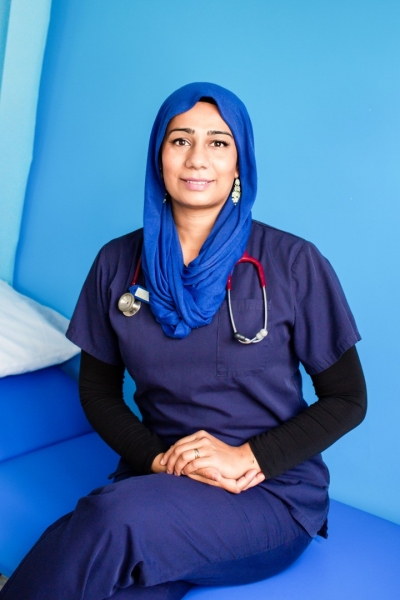 Just to recap, you’re a health professional, you have an active, loving family life, you’re a high-profile member of the British Muslim community and you’re a media star, of what are you most proud?

I have three boys – an 11-year-old, a six-year-old and a three-year-old – and of course, I’m most proud of them but my priority and my big love is medicine and I’ll tell you why. Before coming to the UK aged nine, I never got sent to school, so I have a Buckinghamshire accent because I learnt English here. My father is an Imam, a priest, and whether we like it or not we live in a misogynist society and internalised misogyny is perpetuated, which stunts our growth. Women in my community are seen as suppressed depressed and repressed, and integration in the secular community is hard - the group becomes inaccessible for they are viewed as being unable to progress in Western culture. I felt having an education would release me from these societal norms. I knew I had the intellect and it meant that I could be seen, not as someone’s daughter or someone’s wife; I would have my own voice.

The best way of getting an education was to take the longest degree I could find – I respect and love my background, but I wanted to get away. We all crave freedom, but we are all shackled to our society wherever that is. So, I went off to do a medical degree and for five or six years I was left to study; to consider myself, my faith, and my role as a woman. When you have those different hats, you have to compromise and that is the biggest word in my life. At 23 my parents said we should get you married and the only thing I could do is compromise – an argument wouldn’t help and my love for living always comes first. So, I had an arranged marriage and we’re now coming up to 15 years. He is my pillar of support.

Do you feel we need International Women’s Day?

Well, today is International Hijab Day [we’re speaking on 1 February]. Do we need awareness days? We certainly need days of representation to tackle bias and stop perpetuating myths which have been around for centuries.

Women can also carry this internalised misogyny – and perpetuate it. [a brief chat about the media treatment of Carrie Johnson follows]. But there is so much good, on social media. It can break down taboos, menopause, highlight violence against women and with Covid it has been quick and simple to get the message across.

In the pandemic working on vaccines and talking about Covid completely changed the way I work day-to-day, but my love is women’s health. I thrive off that more than anything and media allows me to communicate to a certain group of underrepresented women. The Davina McCall documentary (Sex, Myths and the Menopause) was very diverse and really got the message across. I was contacted about contributing and I was clear that I wanted my position as an ‘ethnic minority’ woman to be interwoven and integral.  Women in ethnic minority communities may experience symptoms in differing ways – when you’re more used to the 50° heat, a hot flush might be different to how you feel in the UK. But the same lack of oestrogen can contribute towards osteoporosis and dementia. We had planned to get a South Asian woman to talk about her experience and I felt really sad that couldn’t happen; there’s more work that needs to be done but I am now finding more vocal women through social media. It can take something small to make seismic changes. 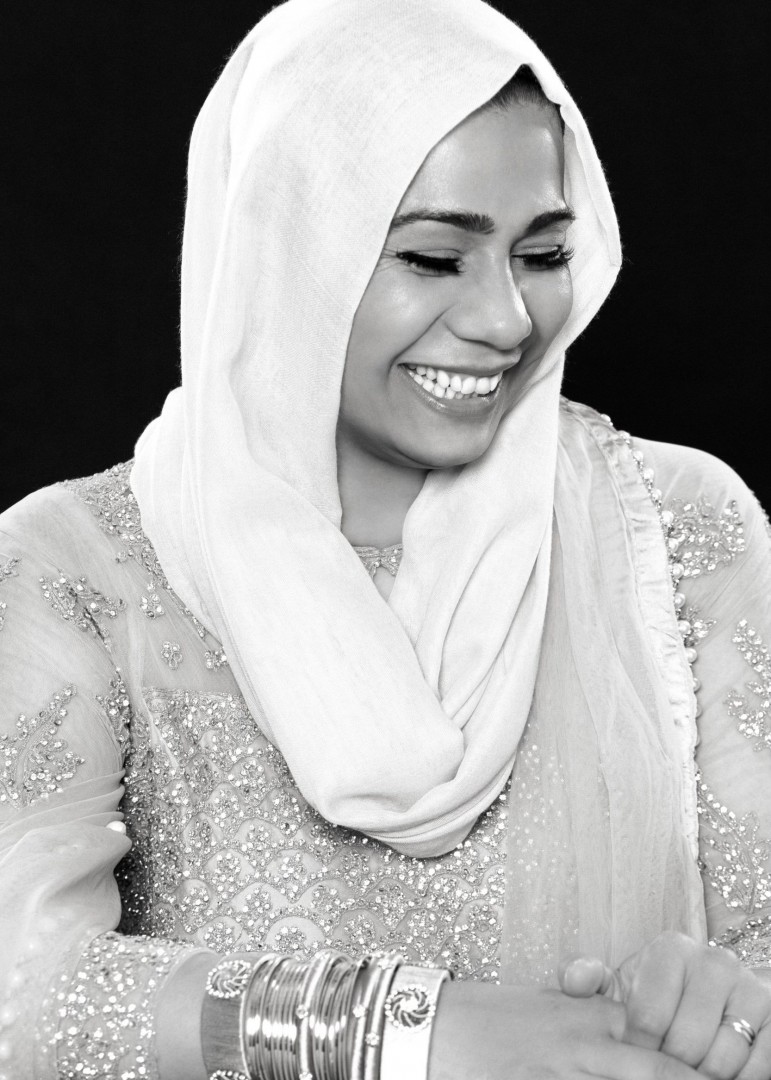 Finally, you’re a finalist for Muslim Woman of the Year Award 2022 in The British Muslim Awards. How does that feel?

I didn’t even know it existed but it is so humbling as it is decided by the public. People nominate and they have six finalists – whatever happens on the day, I can’t complain!

Zoë Law is a portrait photographer. Mostly known for her ongoing body of work, LEGENDS; Representing those that inspire!

Summer suncare is a must and when it comes from an expert skincare brand that’s a double win.