Art Inspired by the Past

“When I was a child, I wanted to be an archaeologist, discovering amazing forgotten treasures like Indiana Jones”

From 1-23 May, the 39th edition of Oxfordshire Artweeks offers both a big virtual festival and more than 200 pop-up-shop, garden and studio venues across the county in which painters, potters, photographers, silversmiths, textile and glass artists, furniture-makers and more are displaying their wares. Amongst the wealth of art on show, Esther Lafferty uncovers twenty-first-century art and design inspired by the past, made in clay and precious metals, and the stories of those who created them. 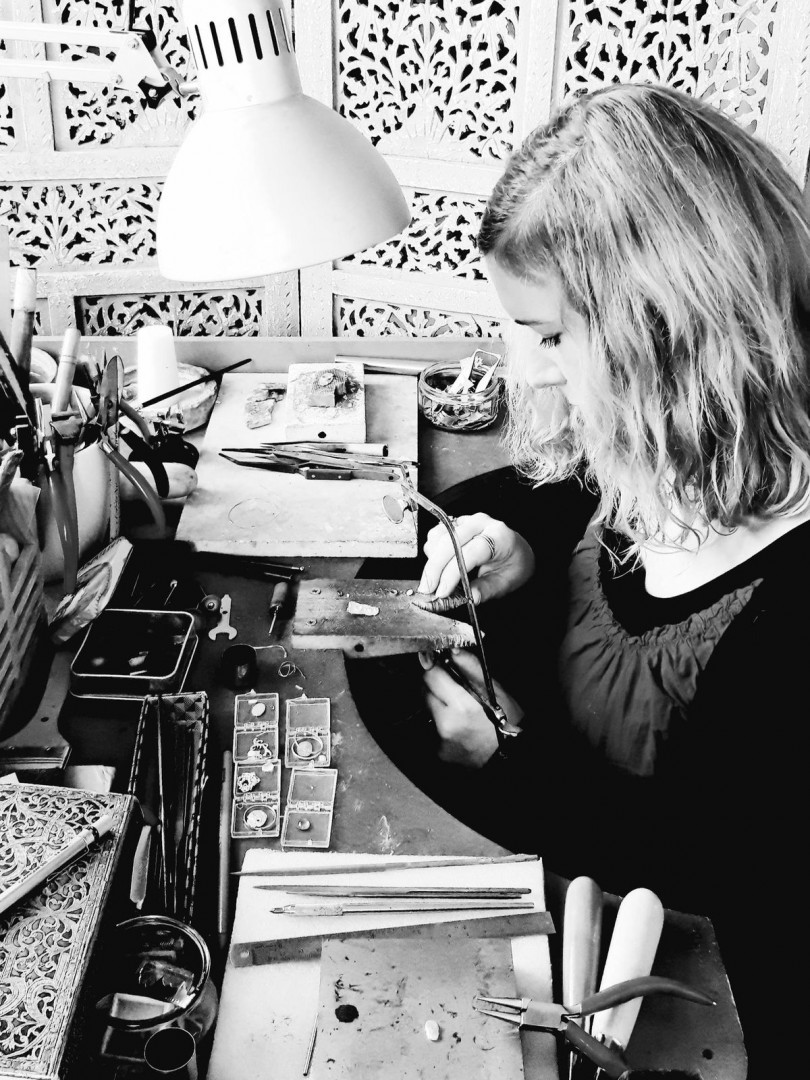 French jewellery designer and maker Chloe Romanos creates bespoke jewellery in a tiny cottage studio in Stanford-in-the Vale, using traditional silversmithing techniques. Combining precious metals with both gemstones such as labradorite, opal, amethyst and moonstone, and beautiful or interesting found objects like rocks, driftwood and shells, she creates statement jewellery, designing rings, necklaces and earrings as perfect miniature pieces of art. Previously however she was an archaeologist in Mycenae in Southern Greece and many of her pieces are inspired by her experience and interest in art history and archaeological artefacts.

“When I was a child, I wanted to be an archaeologist, discovering amazing forgotten treasures like Indiana Jones, and at the same time I also dreamt of becoming an artist, expressing myself using other means than voice and words,” she smiles. 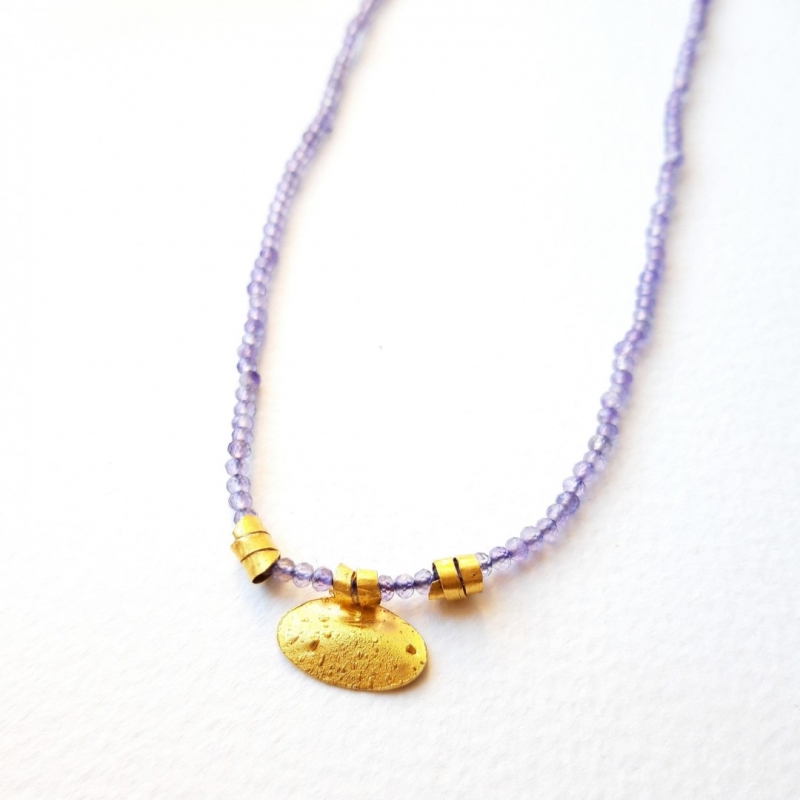 Chloe went on to study art history and archaeology in Paris and then whilst analysing the texture of handmade pottery at the museum of Mycenae, she became fascinated by the way time had transformed objects and left them with worn and crackled textured surfaces. “I also realised I’d like to learn an ancient craft and use similar techniques and tools, and actually experience what I had been studying,” she says. “When I discovered silversmithing I was mesmerised by the 'magic' of metal transformation, and the almost endless possibilities. I like the toughness of the material – you need to use some strength to work with it – and I also like that it is messy, and your hands get as dirty as they would at a dig, but with silver or gold dust!

My creations are an expression of emotions, fragments of experiences lived, inspired by treasures that are all around us. Each has a story behind it, from the winged creations inspired by French Art Nouveau to the textured effects reminiscent of the worn aspect of archaeological artefacts dug up from the ground. I also like to let my imagination be guided by memories of inspiring places I have visited or quotes from books and poems I have read.”

In Watlington’s Town Hall ceramicist Andrea Brewer explains her fascination with the past. 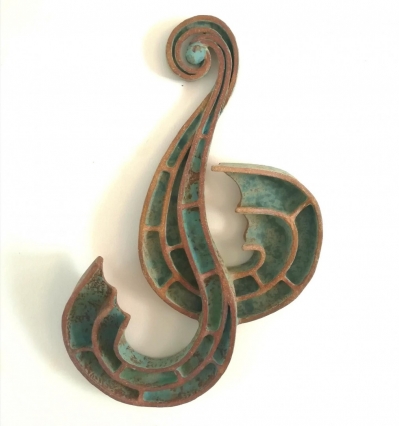 “I’ve always been fascinated by archaeological finds, as links to the past, and mythology and the mystical in literature. As a child, I loved Arthurian legends and books like Alan Garner’s The Weird Stone of Brisingamen and Susan Cooper’s The Dark is Rising. They captured the mystery of the earth in a way that was relevant to me at the time, bringing history and fantasy together.

Then in my late teens, I met a bunch of bikers in the local pub and joined a Viking re-enactment group. Most people thought I was barking mad,” she chuckles “But it was perfect escapism and for several years I spent weekends travelling around the UK and Europe fighting mock battles, spending time in living history villages and learning about their way of life and the tools and treasures. Funnily enough, I think I was destined to be drawn to it – it later turned out that I have extensive Viking ancestry! The Vikings had such a sense of adventure, and I love the idea of riding across the waves on a Viking longship, its prow adorned with a dragon or the curls of a snakehead. The ship figurehead is such an iconic form, and one that I love to use in my art. 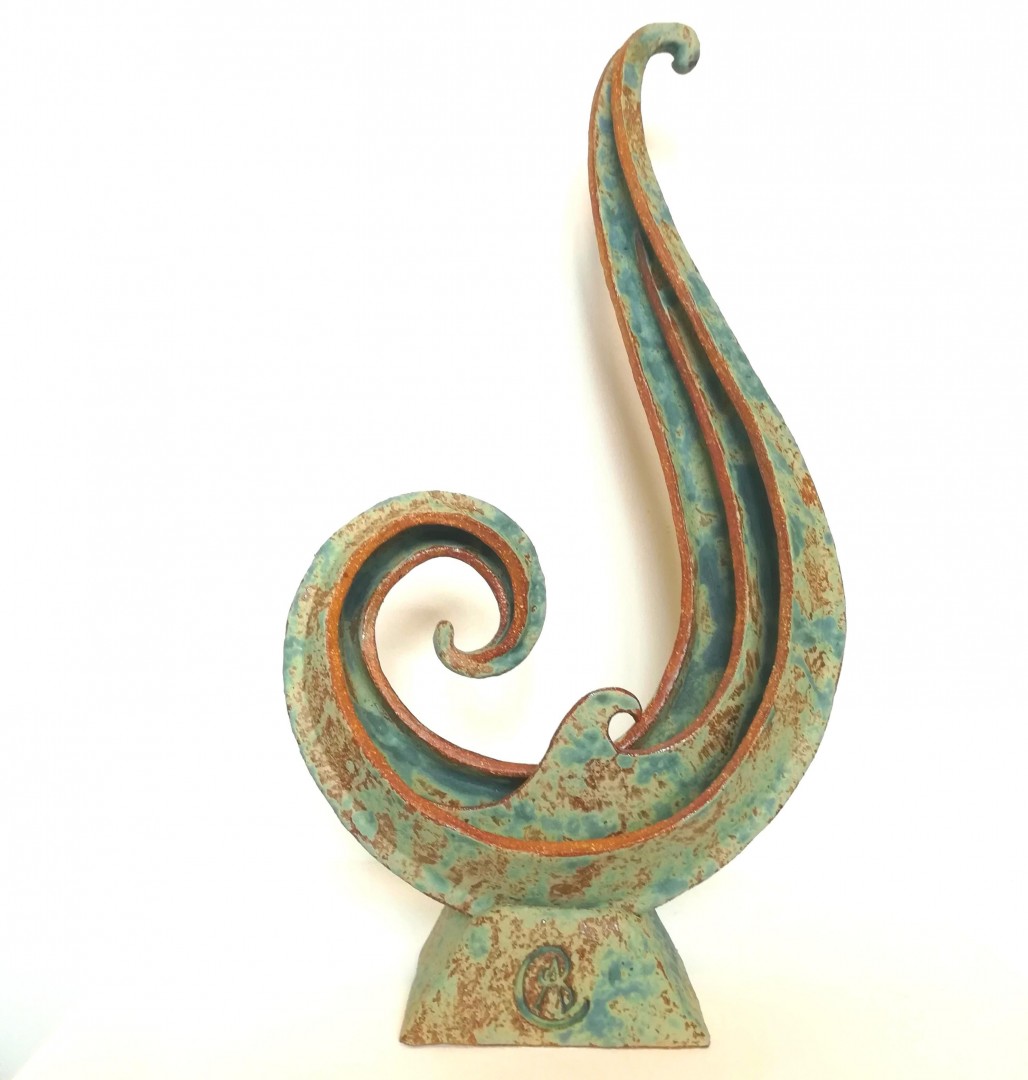 It is an interesting coincidence and somehow fitting that since coming to live in Watlington, a significant Viking Hoard was discovered nearby and is now exhibited at The Ashmolean. This rekindled my interest in the Vikings, and I started a range of ceramic pieces based on real historical artefacts. The Urnes Dragon brooch is a particular favourite. I love dragons, which are a universal feature in mythologies of many different cultures, and I think subconsciously some elements of their form, colour and texture is reflected in the style of my work.”

Andrea also finds herself drawn to ancient history, mythology and Celtic knotwork and these influences are clear in the fluid curves and sweeping spirals for which she is becoming best known.

For Artweeks, she is exhibiting a series of hand-built sculptures primarily using a stoneware clay which combined with dry mottled glazes of her own invention gives each a textured quality resembling lichens found in nature, or rusts and patinas that natural forces create on man-made materials. Each, in a gentle tarnished blue-green, with rust red, could be hewn from the earth, a giant remnant of mythical men who roamed the landscape.

“Apart from finding the spiral a beautiful and pleasing form, I am intrigued by its symbolic significance,’ she explains. ‘Spirals can be seen extensively in nature in the form of plant structures, patterns of growth, and in the movement of the sea and weather patterns. Prehistoric cave painting and tribal carving demonstrate that even the earliest humans instinctively revered the spiral motif and understood its elemental significance: modern science has since proven it is tiny coils of DNA that underpin life while spiral galaxies stretch to the edges of the known universe. 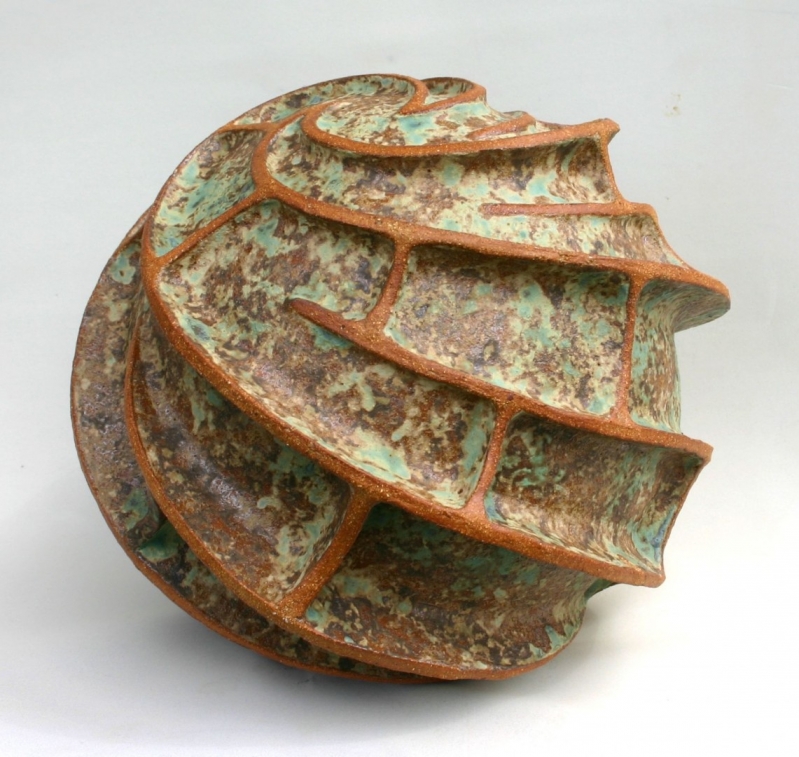 I am also fascinated by clockwork, and the circular movements of its mechanics and I enjoy blurring the boundary between the natural and the man-made to make stylised, almost industrial or mechanical forms that also appear strangely organic. Urban decay and the way nature ‘reclaims’ man-made structures are fascinating, and it is a reminder that most man-made materials originated from natural materials, and that despite all our attempts to preserve them will eventually, in time, revert back to nature.

While some of my work is purely sculptural, I lean towards creating functional art. It’s satisfying to create pieces that not only look beautiful and interesting, but which also have a practical use in the home or garden, and the functionality of an object can enhance its beauty. Candlelight reflecting on a sculptural form can highlight its colour, shape and form; different flowers or plants can add to and alter the appearance of a vase or pot; water travelling over a sculpture can add movement, texture and sound.”

You can meet Chloe and browse her jewellery collections in Iffley and Stanford-in-the-Vale (Artweeks venues 99 & 162) and find Andrea and her ceramic creations in Watlington Town Hall (Artweeks venue 221).

For more on these artists, to explore the venues and to enjoy daily virtual art trails visit artweeks.org