A Sense of Silence

“I find that using just black on white and all the tones between encourages a focus on line, form and light”

In a quiet garden studio tucked away within Oxford’s ring road, artist Claire Christie Sadler is inspired by the visual music of the west coast of Scotland. Claire, who originally trained as a cellist, is the winner of the 2019 Artweeks Mary Moser Award, an annual award intended to help develop the career of a professional artist who has taken up art as a second career later in life. Artweeks festival director Esther Lafferty visited her to explore both her art and the parallels between her two creative professions.

Claire loved both art and music at school, picking up the cello at 11 “which was rather late actually”. Finding herself completely caught up with the love of playing, she went to music college rather than art college. With hindsight, she realises that she couldn’t have done it the other way round as acquiring an instrumental technique is much harder to do later. She maintained her drawing and whilst she loved both playing and teaching, the drive to pursue the visual arts remained strong. So in her late thirties she began taking art classes, which led to a foundation course and then a fine art degree. She set up her wooden studio at the bottom of the garden which, she says, “felt like coming home”. And both the simple space and the art produced within resonate with the feeling of being rooted in a place, and the inner peace and tranquillity that brings.

The views that line the wooden walls transport the viewer to the west coast of Scotland where Claire finds herself drawn back again and again. “I feel as if there’s a part of me that comes alive when I am there, and I know it’s fanciful, but it’s almost as if it is in my genes.” 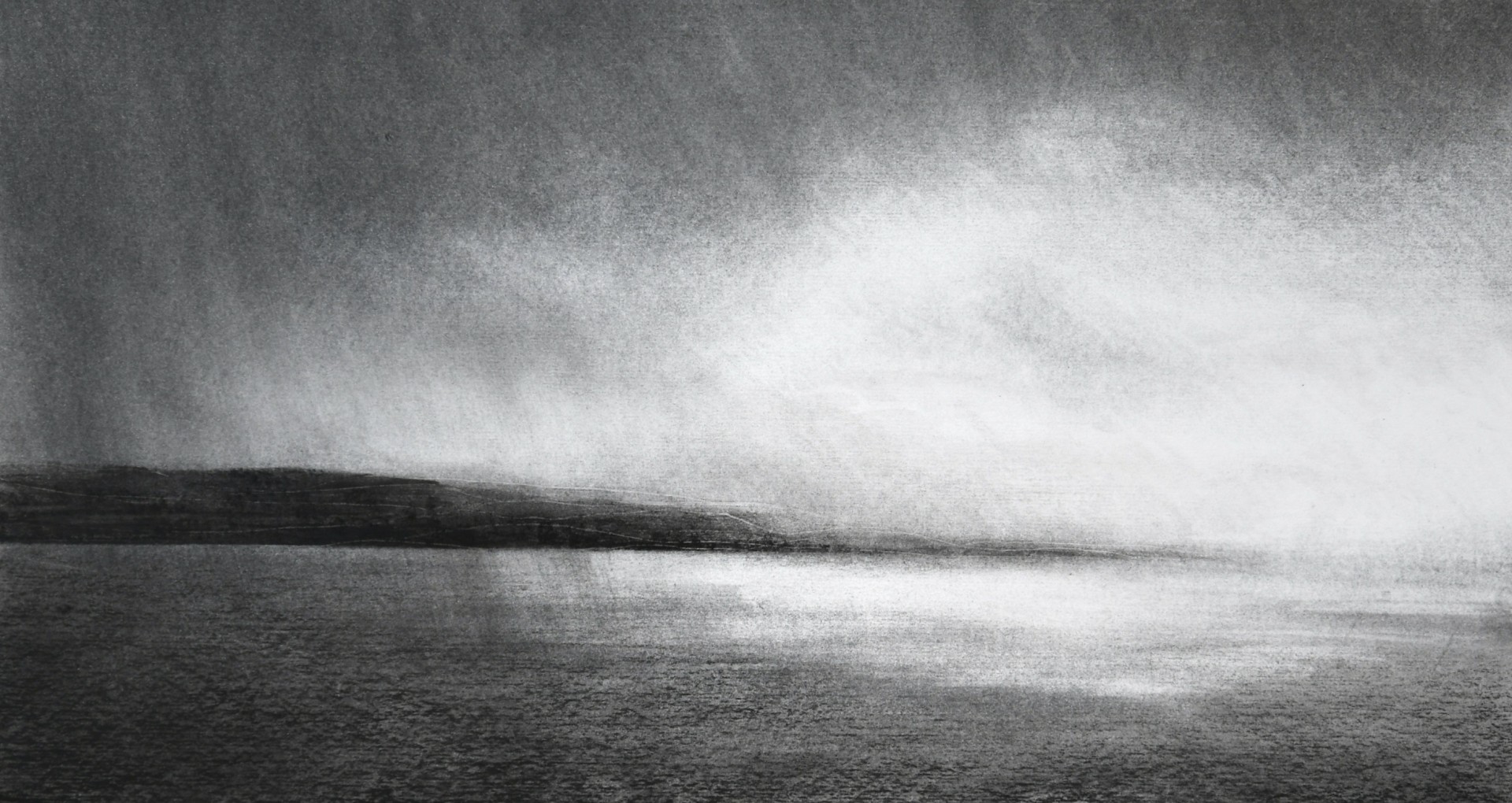 Although her mother is Scottish, Claire first went to Scotland when she was 11. “It felt important and exciting to finally visit,” she explains. “We drove, and I was very aware of the time it took and the distance we’d travelled. I remember feeling an instant connection on arrival, and that Oban was a very special place.” Now, Claire still finds the long drive part of the magic of a trip to Scotland, watching the landscape change with the miles further north. “Beyond the Lake District, the hills start to grow – the sky seems to get bigger and the landscape opens out. The west coast of Scotland offers a sense of perspective, and contradictions too; the vast scale of the landscape heightens our awareness of how small we are, and yet there is an increased sense of self. The ancient history of this place highlights the brevity of our own lives; this place which has such a physical sense of permanence appears to be constantly changing as we look at it. The rain, wind, snow, sleet and light disguise, enhance, conceal and then reveal the mountains, hills and water.

“I don’t care what the weather’s like,” she continues. “In fact, I love the way the sky throws weather at you. Bad weather is so dramatic, and when you’re warm inside looking out at the sleet or the wind sweeping across the landscape, and continually changing the light and the sky, it’s like watching a film roll. There’s such power in the sea and the tides, and the air feels different on your skin; clean and pure, crisp and cold.” 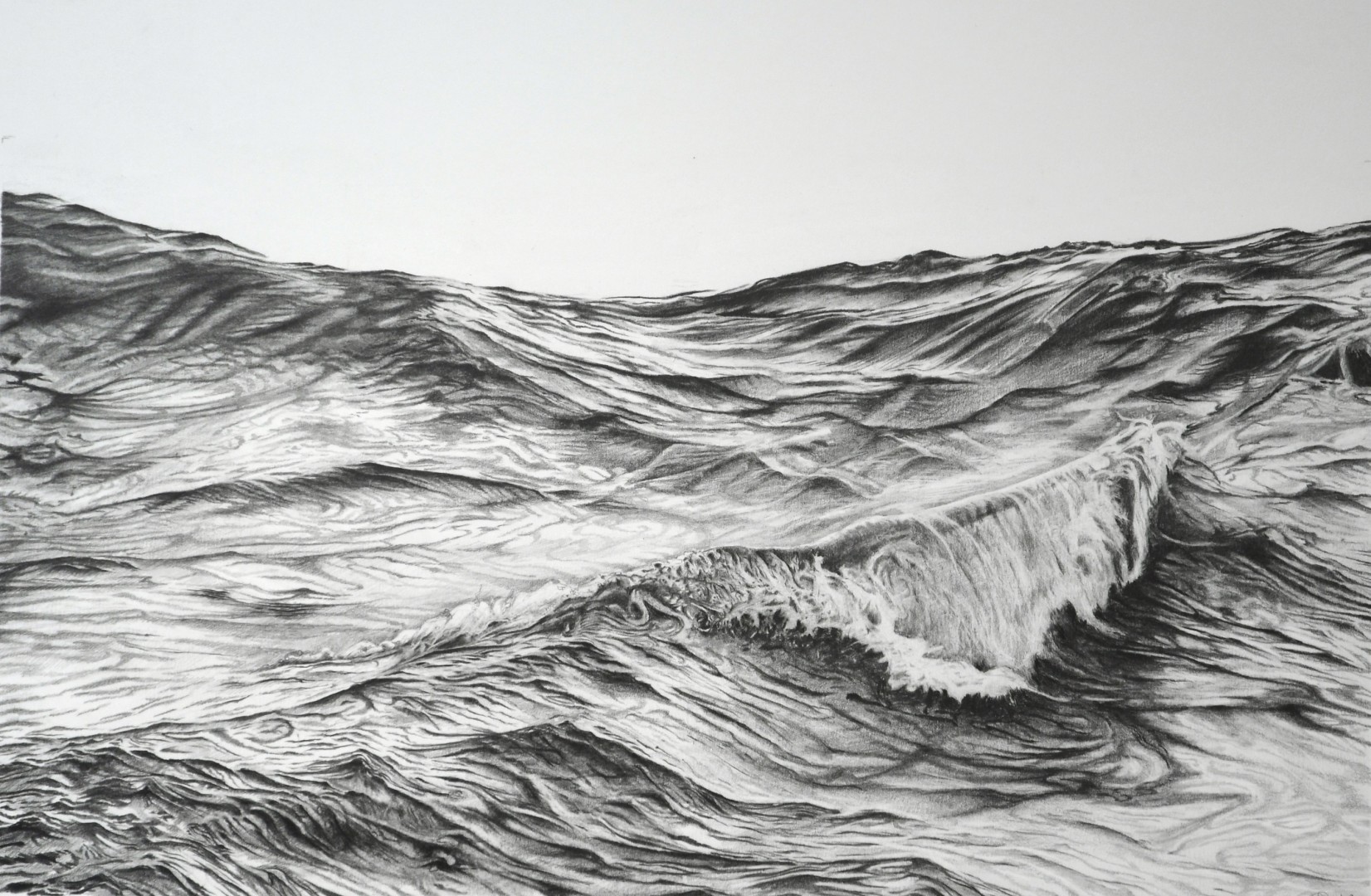 To convey this purity, Claire’s art is almost entirely monochrome, created with a simple set of art tools – powdered charcoal, charcoal, rubber, brushes, and her fingers. There’s a simplicity which gives her pieces a sense of freedom (although she also works in detailed pencil with a meditative precision as when capturing the surface of the sea or sometimes the human form.) “I see my work as ‘making’ a picture rather than drawing one,” she elaborates.

“I love colour in the hands of people who use it well, but I find it distracting to work with. I find that using just black on white and all the tones between encourages a focus on line, form and light: it’s the dark, the light and the contrast between them that defines the sculptural form of the landscape. I love the place where the dark meets the light and the water reflects that. There’s an ever-changing play of light in the sky, which drifts over the surface of the water and land; a mesmeric and restless drama in which the water and the contours of the land are disguised and revealed.”

With awareness, emotion, and quiet contemplation, Claire captures the sense of movement on paper with clear, clean lines and considered contrast. Rich in atmosphere, her drawings show the narrative of the landscape in all its moods, from harmonious, luminous and ethereal to brooding and dark, as the substance of the land, the rhythms of the seasons and the tides, and the transience of the light present a continual ‘performance’ – the parallels with music are clear to see. The relatively stark nature of black and white is explicitly dramatic and expressive whilst timeless and evocative, her light touch and loose lines softening a strong and sometimes bleak skyline. 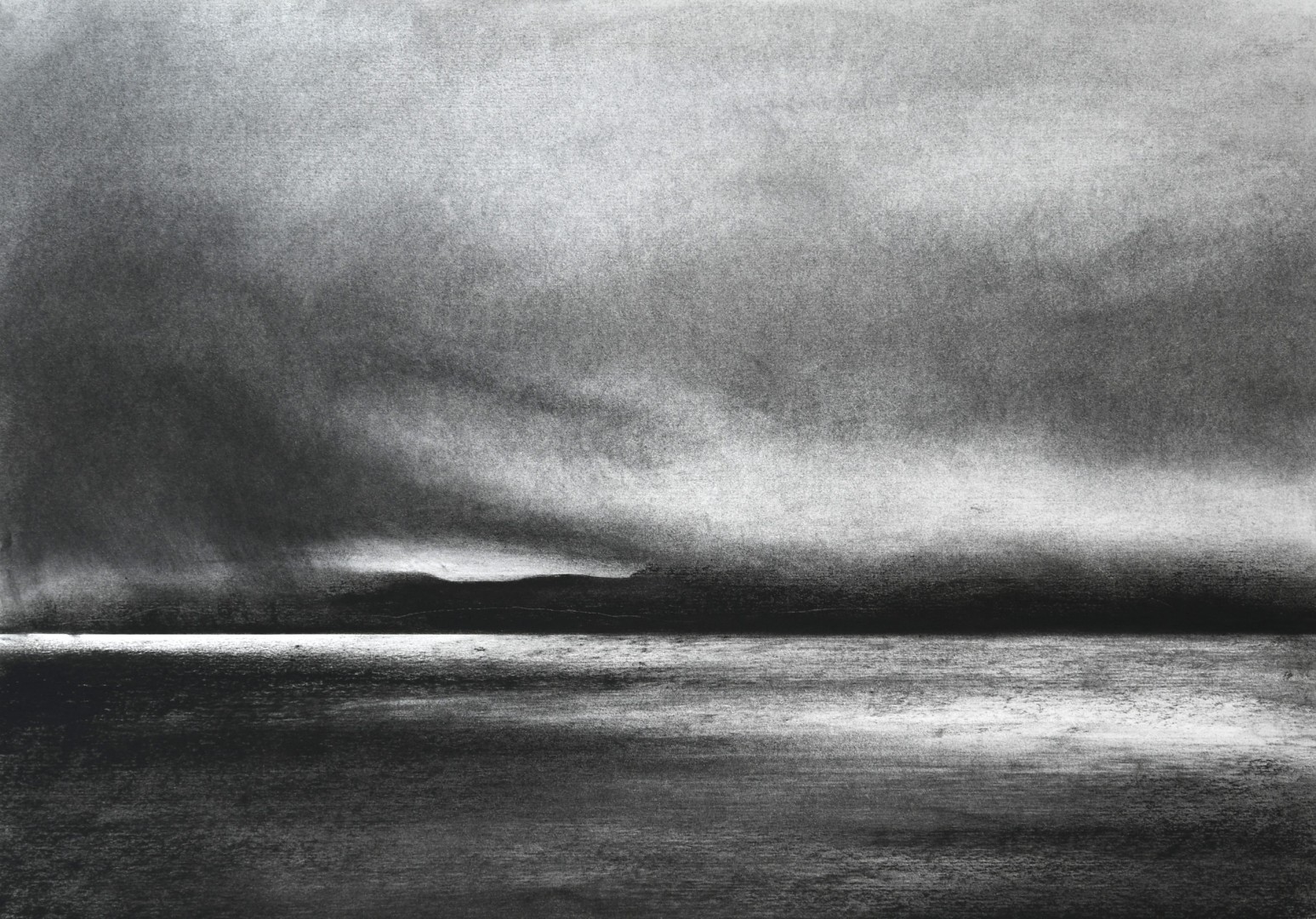 It’s clear from looking at Claire’s work that her music feeds into the art, the transient quality of her pictures, and the technical accuracy too – she’s acutely aware of the movements she uses and the marks she makes, using the charcoal or brush with the precision and delicacy of a bow, for example – and although alone as she creates, it is almost as if it is a performance.

“Art and instrumental music are both wordless forms of communication yet can convey perfectly a feeling or an emotion,” she explains. “In music, silence is as important as sound and in the landscape of the west coast of Scotland, sound seems to take on a new significance. I often think that it is the sound of silence (or at least the lack of man-made sounds) that I am trying to capture in my art.”