Dreaming of the Sea

“I love that feeling of being truly alive”

Bringing the Outdoors in

During the spring sunshine of lockdown, in one of the most landlocked counties in the UK, Oxfordshire residents have been dreaming of the sea. For its artists, these yearnings and memories have been expressed in art to evoke in the viewer that wonderful feeling of dipping your toes in the edge of the waves.

Eynsham artist Alison Berrett, for example, describes her love of the coast with a passion evident in her soulful seascapes that capture both the power and energy of the water and the ephemeral quicksilver nature of the ever-changing waves.

“Oxfordshire is a beautiful place with expansive skies and the beautiful Cotswold countryside, and I love living here. However, I miss the sea and the freedom of living near the coast. The sea pulls me towards it almost as the gravity of the moon cycles pulls the waves in and out with an elemental magnetic force. For me, there is nothing more energising and cleansing than time spent beside it. And even in the most static coastal view, there’s always colour, movement and rhythm.

“I grew up by the coast and some of my earliest memories are of my mother taking my siblings and me, dressed warmly and with pyjamas underneath, down to the seafront when it was a high tide in Weston-super-Mare. There we would watch the waves crashing over the wall, sometimes running away from the sea spray as it erupted like lava towards us. 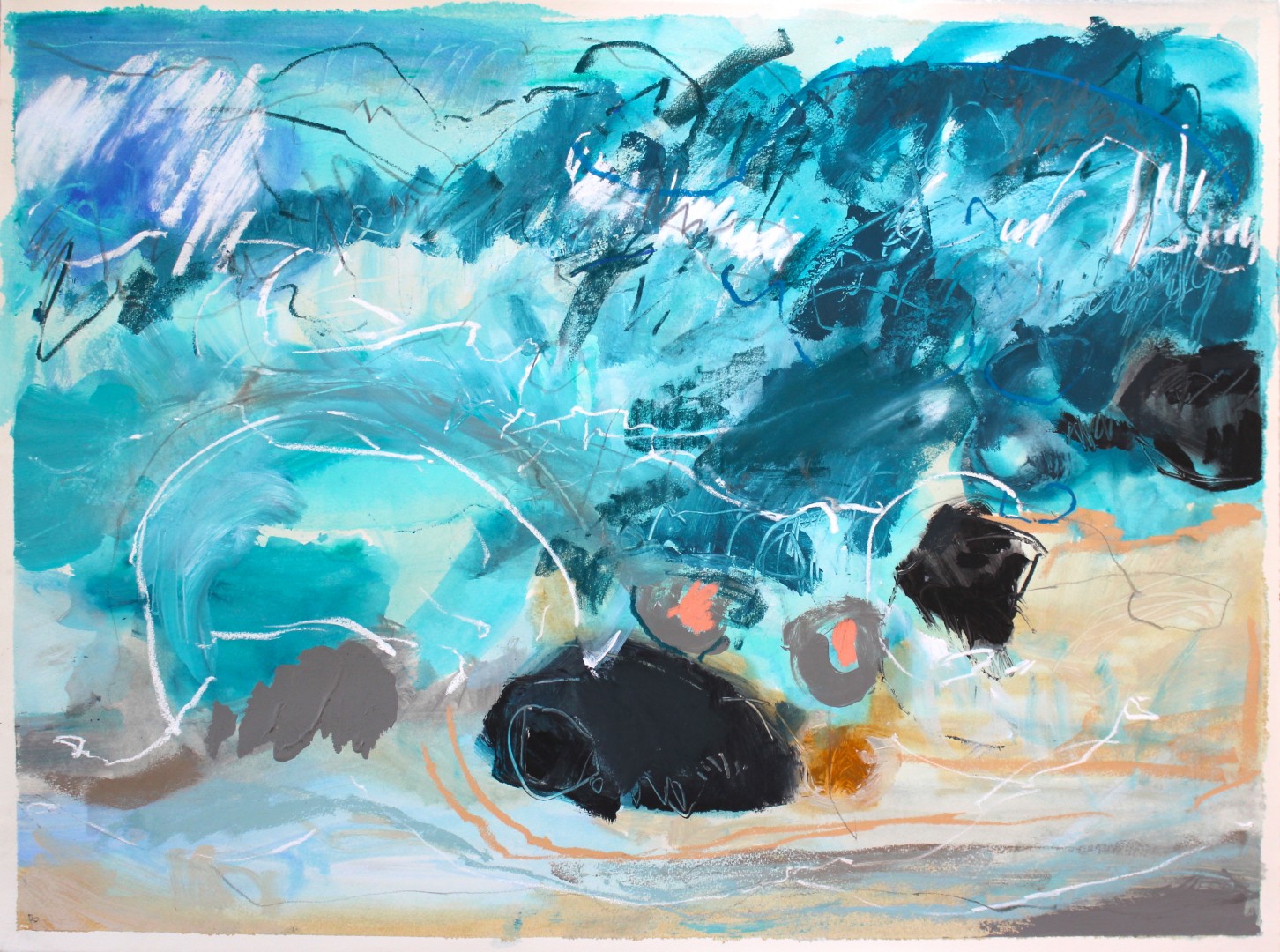 “Later, when a fellow art student and I took ourselves down to Exmouth beach during the terrible storms and made paintings of the sea, I had a revelation about the way I could express myself and respond to the thrill of nature. We were encrusted with sand and the wind was so strong I could only see through a small slit in my scarf which was wrapped tightly around my head. There were some women in the beach cafe opposite looking on in bewilderment, yet it was a turning point for me. The speed at which I had to work and the resultant intuitive and impulsive mark-making are now a central part of all the art I create.

“I regularly go to favourite destinations, usually in North Devon and Cornwall, to walk, draw and paint the sea and coastline. I particularly love Woolacombe, and St Ives is inspirational with its rich artistic heritage – I love to visit both the coves and the Tate too where a giant curved window overlooks the sea and reflects the water back into the galleries.

“Cornwall is glorious in the summer, and equally amazing in the winter when there is more space on the beaches – the light is more changeable and the more tempestuous weather adds theatre and vigour. I get such a thrill when the world around me is dramatic and overwhelming. I love that feeling of being truly alive.”

Alison records the light, dynamism and energy of squally waves with her lyrical lines, using colour with passion to capture the joy, wonder and awe that she feels, drawing in situ and then, on her return to her studio, creating series of drawings in pastel, paintings and collages with a degree of abstraction, blending the elements of the land and water with memories and emotion. Each recreates a sense of wave after wave hitting the sand and the multiple directions of spray, white horses, swirls and puddles, tantalising turquoise, azure and royal blue set against sienna, peach and ochre.

It is the fragility of the coastal habitat that caught the attention of Headington painter and printmaker Jane Strother whose interest in the environment leads her to observe, sketch and reflect upon topography, ecology and botany.

Her latest series of work focuses on the west coast of Ireland which, like much of the coastline of the British Isles, is eroding faster than expected, she explains, “and this little piece of Mayo is no exception.

“I arrived towards the tail end of Hurricane Dorian last year with nothing between us and the devastated Bahamas. Poking about on an exposed, rocky beach, I had time to delight in the extraordinary colour of the rock pools and came back the following day with sketchbooks, only to find that the wind had strengthened overnight and the outgoing tide had whipped away anything that wasn’t fixed.” 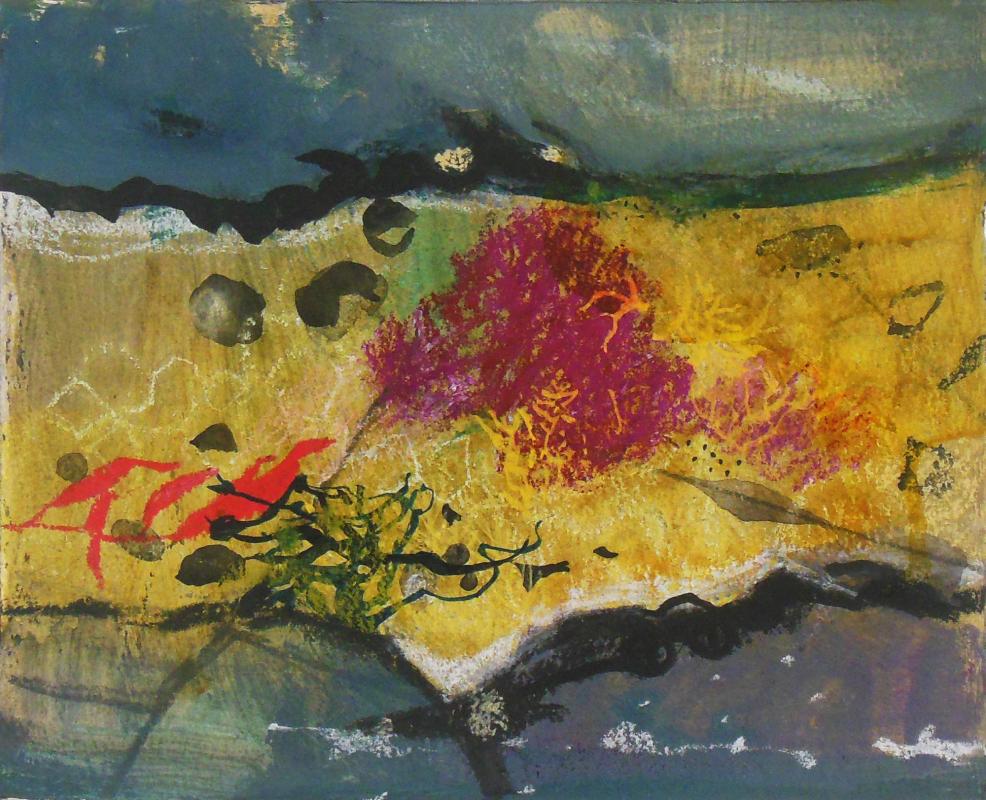 Each of Jane’s pieces captures the depth of the pools, the wateriness, the fluidity, the quality of the vegetation, and tells the underlying story of the flora and fauna at the tideline through careful composition, colour and mark-making. “My paintings, drawings and prints are informed by quick sketchbook drawings made at the time and many photographs, recording the look, feel and energy at the edge of these waters. I record both the rather elusive sea creatures and correspondingly abundant sea weed species.” 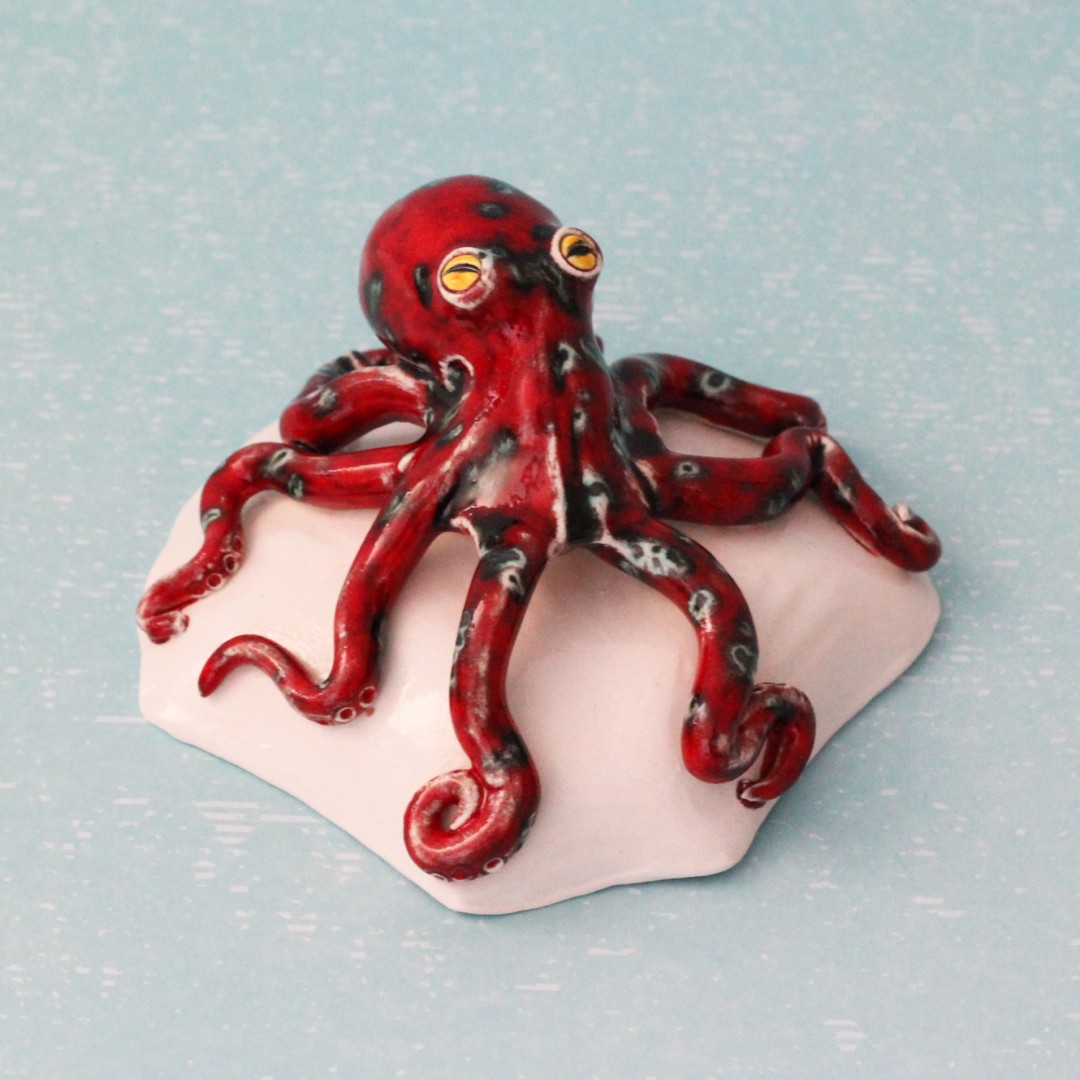 For ceramicist Maxine Macdonald, in contrast, there is just one marine species that fires her imagination and it is the octopus, which inspires many of her hand-built pottery pieces – both decorative and functional in Octomugs, in which the handle is a curved tentacle, and Octobottles that could have been pulled from pirate legends of buried treasure. “I’m fascinated by the octopus,” she enthuses. “It has been my favourite creature for as long as I can remember so it is probably my ‘spirit creature’! I love the way they can be camouflaged in organic neutral hues or appear in beautiful striking colours. Octopuses are very intelligent and also have such character. With eight limbs and their elegant twists, they’re incredibly expressive animals and they’re playful in nature too, a winning combination. They’re fun to watch and equally fun to sculpt.” 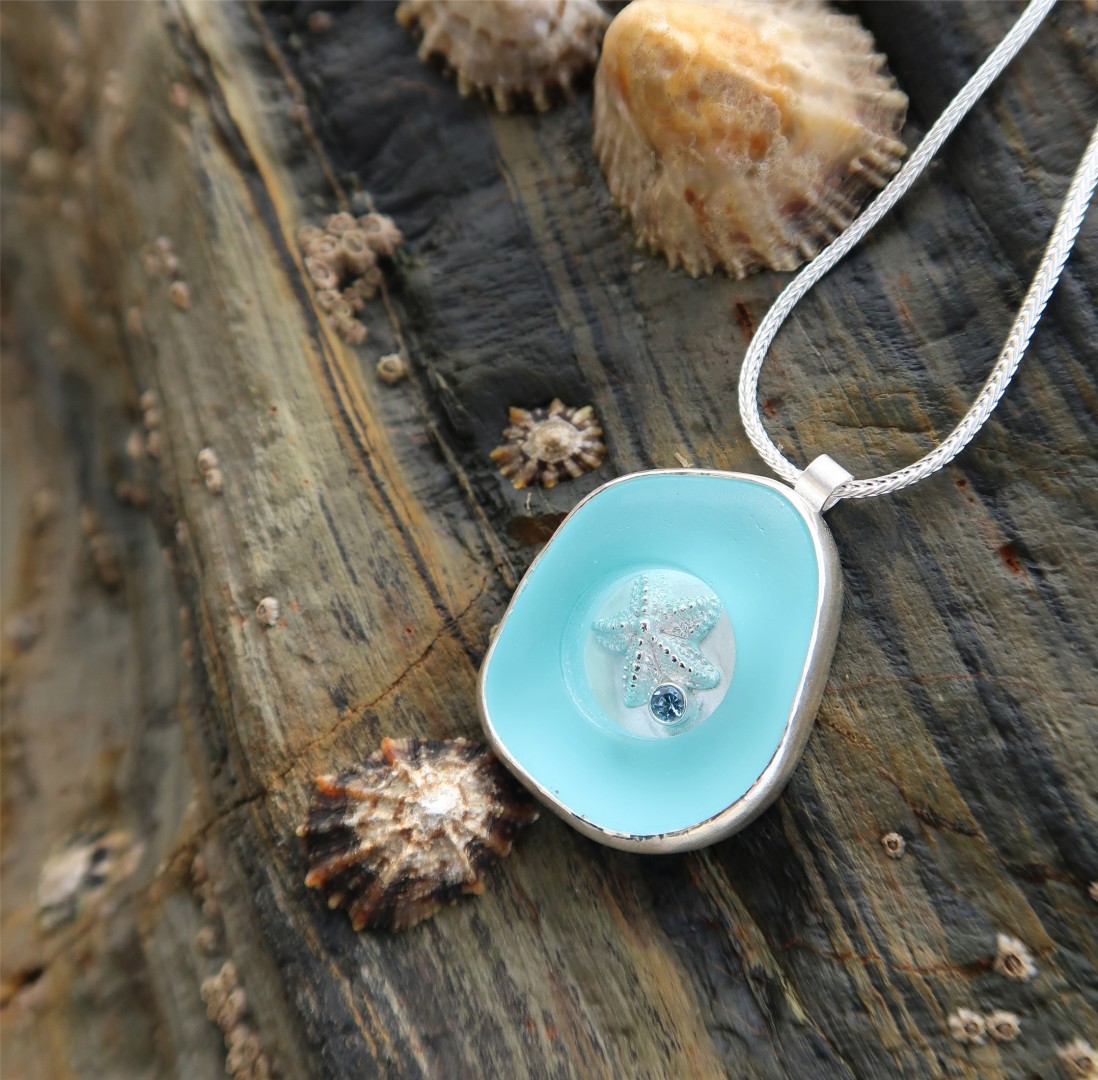 And for jewellers Rosie Colvin and Sally Spencer, it is tidal finds that inspire many of their pieces. Rosie sets cowrie shells into silver findings while Sally’s rockpool collection wraps shimmering silver starfish in cobalt blue, turquoise and aquamarine – reminders of precious time by the sea and the treasure to be found in rockpools and on the beach. A Fellow of the Gemmological Association of Great Britain, Sally describes how her love affair with stones started when she was small, spending many happy hours collecting pebbles on the beach. The stones may have become more expensive over time, she laughs, “but I am still fascinated by them.”

For further immersion in the coastal treasures to be found here in Oxfordshire, and a virtual trip to the coast through the work of dozens of artists, click here.