Fairly lanterns in the Forest

A Force in Fashion: LadyBoss

At Oxford Botanic Garden, we carry out research into poorly-known plants with other botanists around the world. Last year, I worked with scientists in Malaysia to describe a new species of so-called ‘fairy lantern’.

Fairy lanterns (genus Thismia) are among the most extraordinary-looking of all flowering plants. They grow in the darkest depths of remote rainforests where they are seldom seen. There are some 90 species worldwide, distributed across the forests of Asia, Australasia, South America, and the USA. They do not possess leaves or chlorophyll; instead, they obtain their food from root-associated fungi shared with other green plants. Their mysterious flowers emerge just briefly, and often under leaf litter, so few people are lucky enough to encounter them. 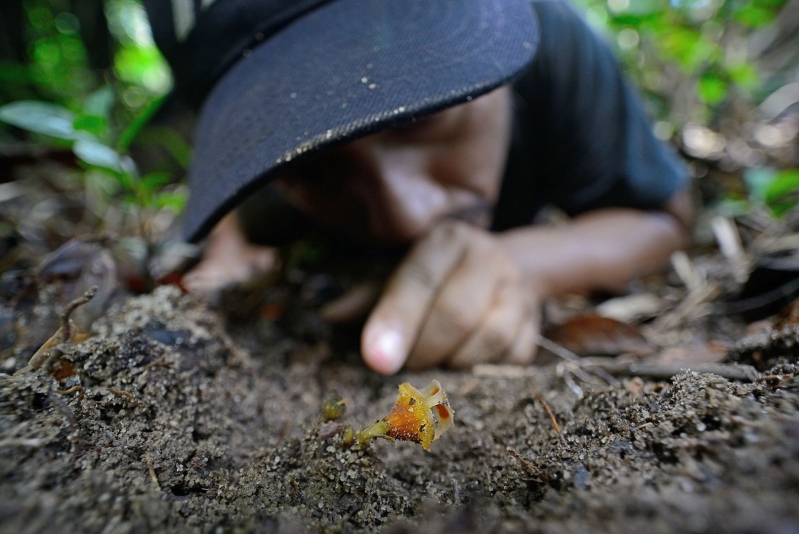 This species was discovered by the rainforest explorer Dome Nikong in 2019 who, astonishingly, found the plant growing along a popular tourist track on Gunung Sarut, a mountain located in the Hulu Nerus Forest Reserve in the state of Terengganu. In February 2020, Dome was joined by a team of botanists including researcher Siti-Munirah. But to their dismay, the only known ‘fairy lantern’ plants had been destroyed by wild boars except for a single fruiting specimen.

Examining the little material collected from the two trips, Siti-Munirah, Dome and I were able to describe and illustrate the new species in 2021. We examined the architecture of the flower – its shape, colour, and surface characteristics. We found that it has a unique and peculiar orange, lantern-like flower with pillars holding up a so-called ‘mitre’ – an umbrella-like structure, the function of which is a mystery. We named the plant Thismia sitimeriamiae after Dome’s mother Siti Meriam, honouring the support she has given his life’s dedication to conservation work in Terengganu, Malaysia.

The plant’s unique and remarkable ‘mitre’, colour and surface texture make Thismia sitimeriamiae among the most eye-catching plants ever described from Peninsular Malaysia. The extraordinary architecture of the flower raises interesting questions about how it is pollinated – so much of the plant’s biology remains a mystery.

What is certain is that the plant is exceptionally rare – it has only been seen twice and may already be extinct – attempts to relocate the plant have failed. For these reasons, the plant is already classified as Critically Endangered (CR). Further survey work is now needed to bring fairy lanterns out of obscurity and inform the conservation priorities for these mysterious plants – many of which have been seen only once, and some of which may never be seen again.

The new species was published in the journal Phytokeys and can be seen here: phytokeys.pensoft.net/article/68300/

Local charity, Dementia Oxfordshire, are marking Dementia Action Week by hosting and attending events across the county. They are providing information and advice to people with a dementia diagnosis and their loved ones, encouraging local organisations and businesses to take dementia awareness training and urging individuals to visit the GP if they are concerned they may have dementia.

It’s Not Talking if You’re Laughing

I recently tweeted that I’ve had the kind of year where if you read it in a book, you’d be like ‘Okay, that’s a bit far-fetched.’ and when it got to the stage where my sister’s therapist asked if I was okay, it felt like it might be time to do something about it.