“Rich with emotional backstories and explicitly referencing the centenary of the end of WWI, this exhibition is also a celebration of the landscape and the way it regenerates after devastation”

I meet landscape painter Anna Dillon deep in south Oxfordshire, in the gloriously green village of Aston Tirrold, alongside the Ridgeway.

For the last four years, she has been researching the story of the men of this landscape and the part they played in the similar and yet very different landscapes of the First World War and the legacy left behind in art, literature and on the land itself.

In a uplifting and yet moving exhibition in Didcot’s Cornerstone Arts Centre this month, Battlelines Redrawn, Anna presents a series of contemporary oil paintings, each looking at today’s panoramas, both here and on the battlefields of France and Belgium, before taking the viewer on a journey back and forth in time, from the beautiful Oxfordshire countryside to northern Europe 100 years ago. Her pictures resonate both with the familiar scenes we enjoy on glorious sunny days and with elements of the past from every one of our families.

One of Anna’s powerful pictures, for example, shows the wide views from nearby Churn on the Oxfordshire-Berkshire border – the classic rolling hills of the chalklands of the downs, now exuberant with the sunshine yellow of rapeseed. During the First World War the view was very different – this was the site of Churn camp where hundreds of local men trained for the Berks, Bucks and Oxfordshire Yeomanry and the old Newbury to Southampton railway line ran through the valley bringing horses, tents, and provisions to the men. It is from here many local men headed to the western front, never to return. 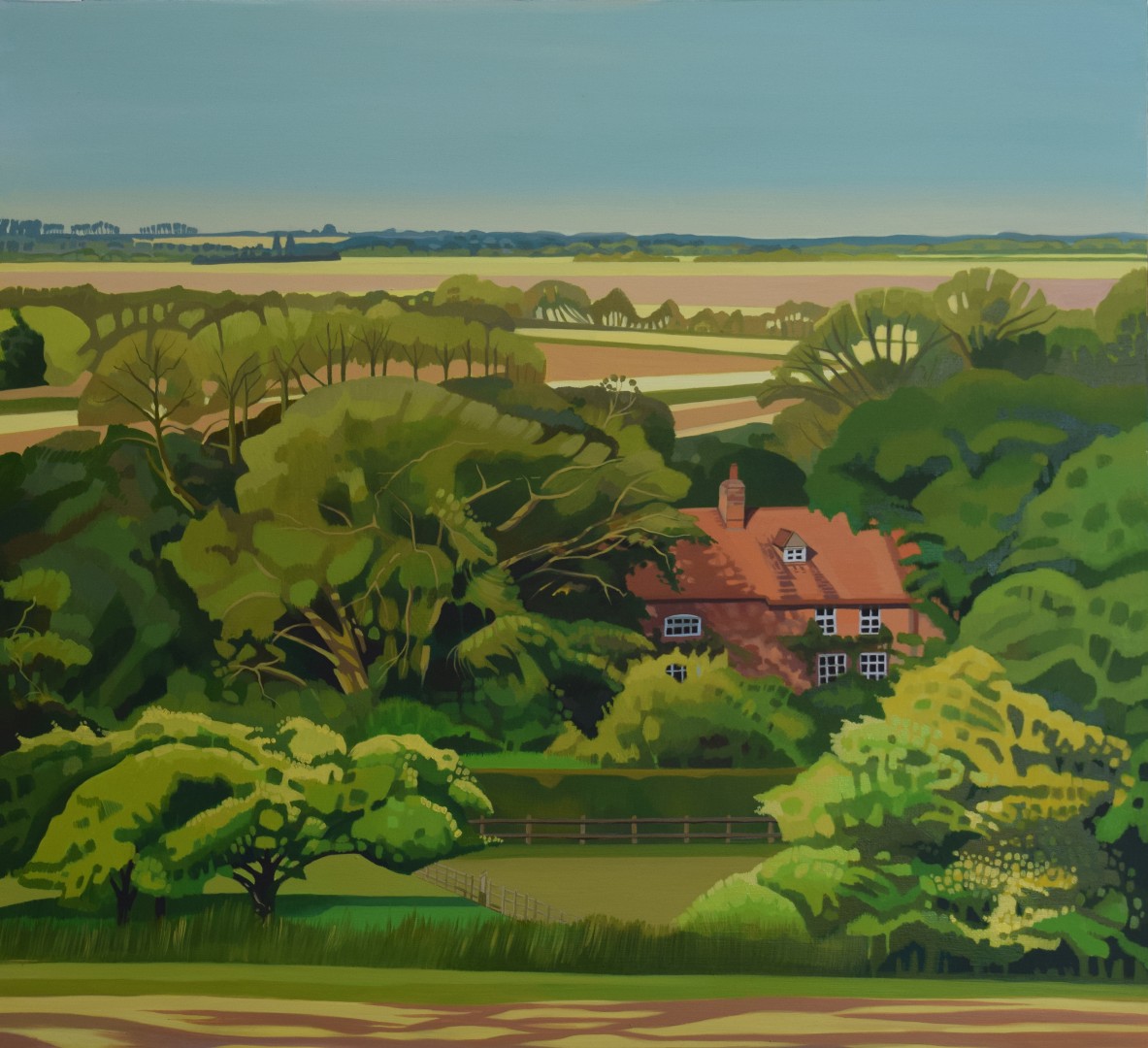 Anna has followed the progress of some of the individuals who took this journey, and describes how she uncovered the tale of local lad Fred Savegar from the very road on which she lives today. Savegar was the first soldier from Aston Tirrold to die on the Ypres frontline, aged 27, leaving behind a wife and baby. Military archives show his last movements were in a place known from British trench records as Polygon Wood. His body was never found but his name is recorded at the Menin Gate, a giant memorial dedicated to the British and Commonwealth soldiers who were killed in the Ypres Salient of World War I but whose gravesites are unknown. Polygon Wood, which Anna has painted in glorious glowing greens, today stands luscious and tranquil, despite the horrors of its past.

Another picture shows autumnal woods from above – thick copper canopies adjacent to lines of gravestones like stark white teeth, a view Anna captured aerially whilst flying over Delville Wood in a helicopter with the archaeologists with whom she was working in the Somme one November day. She describes how the wood itself is a massive memorial, and walking through it on a crisp autumn day she was conscious that she was walking on a huge burial site, and that each tree perhaps represented both a lost soul and a hundred year’s regrowth.

The exhibition can be enjoyed in a linear way, opening with a charming painting of a red brick farmstead at Lollingdon Hill nestling in a copse of thick-leaved green, a house built by monks nine centuries ago as a place for rest and contemplation. This house, just a mile from Anna’s studio as the crow flies, was home to John Masefield (poet laureate from 1930-1967) and it stands unchanged today. Here, between Blewbury, Cholsey and Moulsford just a month into the war, Masefield penned his only known war poem ‘August 1914’, a pensive verse describing both the glorious familiar vistas – the farms and the fields, tiled stacks and harvest stubble, the blue hills of the Chilterns and the grasses of the ancient Ridgeway in the glimmer of the moon – and the men leaving their muchloved Downs, the air ‘rutted’ by passing guns.

At 36, Masefield joined the war effort as an orderly, working in a Red Cross hospital on the Somme in Northern France. Here he wrote a haunting account of the slaughter on the Somme – The Old Front Line – and became friends with the prolific official war artist, Sir William Orpen, who was the first person to record the appearance of the giant Lochnagar Crater on the Somme battlefields in 1916. This giant white chalk scar on land that had previously been farmed was caused by an underground explosion from a mine laid by the British Army’s 179th Tunnelling Company (Royal Engineers) underneath a German stronghold called Schwaben Höhe. The crater – the largest man-made mine crater in the world at almost 100m in diameter and over 20m deep – astounded Anna both by its size and its enduring impact upon the landscape, and her stylised perspective of the crater 100 years on hangs as a centrepiece in the exhibition.

Anna also visited the Ypres Salient where artist Paul Nash painted a smaller crater. While Paul Nash is a painter most-often associated with the Wittenham Clumps, he showed a clear transition in his work from a romantically minded youth pre-1914 to harsher paintings during and after the war influenced by his experiences. His stark depiction of ‘Caterpillar Crater’ in 1917 was a ruinous muddy brown rimmed with the burnt stumps of past trees, and contrasts with Anna’s version of the same scene today, fresh with new life.

The finale brings the viewer back to the present day and the view of the Thames Valley from the Chilterns near Watlington, in vibrant greens and yellows beneath a summer-blue sky. So, whilst rich with emotional backstories and explicitly referencing the centenary of the end of WWI, this exhibition is also a celebration of the landscape and the way it regenerates after devastation, marking with meaning what it meant to those who gave their lives to preserve this land and the liberty of those living upon it.

The exhibition runs until 25 November at Cornerstone Arts Centre, and includes Anna’s paintings, some 2m wide, and a selection of photos from historical archives. 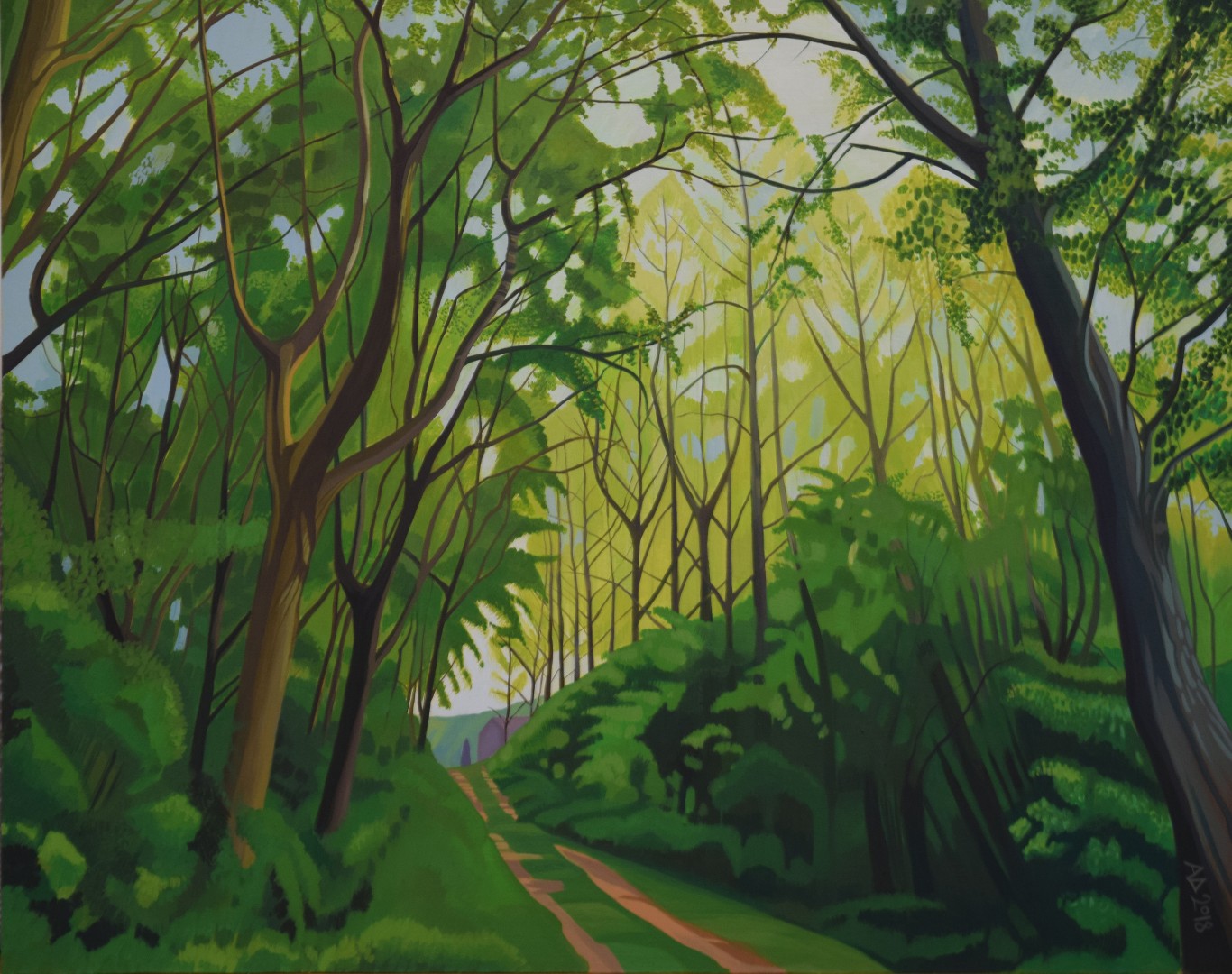