“When finding themselves in a crisis, Brits will reach for the kettle ”

Tea  is at the heart of British culture  and a prominent feature of our everyday life. Our National Tea Day falls on 21 April. The history of tea is fascinating. Originating in China and the Far East, it was introduced to Britain in the 17th century by Catherine of Braganza, a Portuguese princess, a serious tea enthusiast and wife of Charles II. At first, tea was popular amongst the upper classes, however, it did not take long to be embraced and loved by the whole nation and become an inseparable part of British lifestyle.

We have numerous reasons to be thankful for those inconspicuous cups of tea consumed by Brits over the last few centuries. During the Industrial Revolution tea’s caffeine properties supported the working population pushing through the long working hours and challenging working conditions. Tea was also instrumental in the prevention of pandemics. The act of boiling the water in order to make delicious, boosting tea has helped to fight off diseases such as cholera, typhoid and dysentery.

One of my favourite taglines about tea that has gained popularity over the last decade is, ‘Keep Calm and Drink Tea’. A simple phrase that holds deep scientific and therapeutic truths.

According to the  American Psychiatric Association, 1 in 6 people will experience depression at some point in their life. You might find that drinking tea helps. There are studies that suggest drinking tea, especially a range of herbal teas, could be helpful in the treatment of depression. The National Library of Medicine, in 2016, published the results of a study indicating the long-term soothing and positive effects of chamomile tea in the effort of reducing the symptoms of depression. Similar studies have been conducted regarding the positive effects in tackling depression, stress and anxiety with green tea and ashwagandha tea.

The mere ritual of putting the kettle on, waiting for the water to boil, brewing the tea to the desired consistency, adding or not adding a dash of milk and sugar, and then slowly and steadily nourishing every sip of this boosting hot beverage, is a rewarding and thoroughly comforting process. 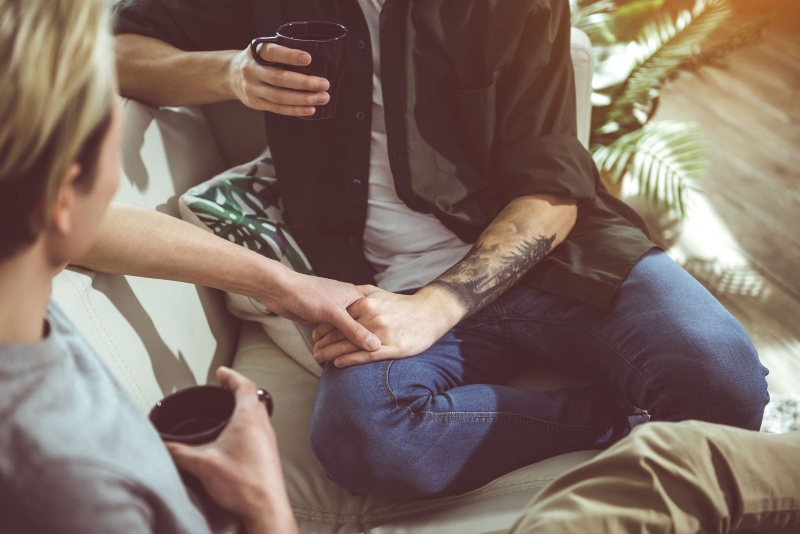 When finding themselves in a crisis, Brits will reach for the kettle. A comforting cup of tea is considered by many as the fourth emergency response. Talking from personal experience I have conceived my best ideas and found exceptionally effective solutions to problems during my frequent and treasured tea breaks.

In addition to being a great problem-solving opportunity sharing a beautifully brewed cuppa can lead to wonderful and meaningful social interactions with those closest to us, whether they be colleagues, friends, or family members. Sharing a cuppa together encourages and strengthens connectivity. Connectivity typically enhances positivity and has a direct beneficial impact on our mood and emotions. During relaxing tea breaks and chats, our bodies secrete a wonderful hormone called oxytocin. Oxytocin is associated with the release of happy hormones, which is especially important during periods of stress and anxiety. Oxytocin also acts as a cortisol suppressor effectively supporting our body in reversing the detrimental impact of stress and anxiety, both physiologically and psychologically.

Green tea, avocados, figs, watermelons, and spinach are superfoods that actively contribute to the healthy secretion of oxytocin, aiding us to be happy and cheerful versions of ourselves.

So, if you are looking to shift your mood and generate a warm feel-good state whilst lowering levels of stress and anxiety, regulating emotional responses and pro-social behaviours, building trust, empathy and optimism, simply put the kettle on.