“I am hopeful that the reduction in the use of fossil fuel during the pandemic and the increased focus on sustainable energy by many countries around the globe, will save this fragile beauty for millennia to come ”

Happiness In Your Home

Esther Lafferty looks ahead to a new year with optimism, and art that reminds us of the world’s beauty, and the ways we can address climate change.

Jericho artist Uniz Chuey’s latest work includes a series of screenprints, ‘Martyrs’, dedicated to those without a voice: endangered species. “Human activities increase the heat trapped in the Earth’s atmosphere and, as a result, the planet’s increasing temperature is melting ice caps in the Arctic, raising sea levels, changing rainfall patterns and creating other extreme climate events like hurricanes and cyclones. Climate crisis has caused untold suffering,” she explains. “Human greed and profiteering from natural resources for personal gain is leading to the deterioration of our environment which causes an existential threat for all creatures. However, we have a voice; we can speak up and we can shout. We can all contribute to change for the better. This is my way of shouting for them, the martyrs of the climate crisis.” 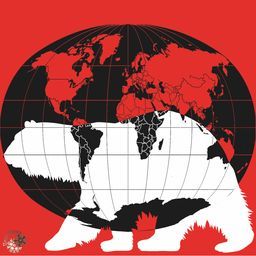 Abingdon’s adventurer-artist Leila Javadi-Babreh, also concerned with making a stand against habitat destruction and poaching, has painted the markhor found in Pakistan where its numbers have diminished sadly. It’s a resplendent painting that that shines with promise.

“The screw horn goat, also known as the markhor, native to Central Asia, Karakoram and the Himalayas are adapted to mountainous terrain with steep cliffs, between 600 and 3,600m elevation,” says Leila. “They have also been listed on the International Union for Conservation of Nature (IUCN) Red List as Near Threatened since 2015. Here, high in a rocky cave, a male shelters from an icy wind, visible by the sharp ice blue piercing through the canvas. Despite a cold dagger coming through, the goat is rested and seemingly content. His regal appearance is emphasised by a kiss of sunlight on his coat and 24ct gold leaf laced in the rock. The pattern dates back to Zoroastrian times and is embedded in the rock, beautifully revealed as the surface cracks.” 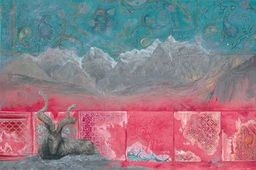 With a series of deeply textured icy images that make you appreciate a seasonal thick jumper and woolly socks, Blewbury artist Helen Young describes the magic of the glistening ice in the Antarctic and her hopes for the future.

“I’d been north before to Iceland, Norway and Arctic Sweden, as well as to the icy Himalayas, but a recent expedition south to Antarctica, following in the footsteps of the explorer Ernest Shackleton (1874-1922), was the ultimate journey for me,” she explains.

“I was first entranced by the power of ice when I went to Iceland, which I found to be magical, intriguing and unexpected. There was a volcanic stretch of coast called Diamond Beach where glacial ice lay in glittering broken shards on the dark black sand like something from a Snow Queen fairytale. The landscape in the moonlight was just sublime.

“On the way to Antarctica, the ship on which we lived for three weeks sailed into Deception Island’s interior, a giant lagoon enclosed by the crater of an active volcano. There was a complete circle of black rock iced with white snow around us which brought back memories of Diamond Beach. You can’t see a greater contrast than that in the natural world: it’s extraordinary. The island had originally been a whaling station and the more recent scientific stations there were seriously damaged by volcanic eruptions in 1967 and 1969. The history was fascinating but, for me, the thrill of going to Antarctica was in the ice and icebergs, which are monumental. Although the wildlife was incredible – whales passing very close by and penguins funny to watch even when you’ve seen thousands – I was captivated by the phenomenal range and layering of colours in the ice, which I translate to my work as I build up transparent colours like phthalo turquoise – a brilliant cool aquamarine-blue shade, with Prussian blue and layered with whites. To these I add cold wax to create bold textured abstracts inspired by the lines and form of the Antarctic that recall the feeling of being in that icy environment.”

Two hundred years after the first sighting of the Antarctic continent, Helen’s art promises an immersive experience for the viewer, as they stand surrounded by this vivid series of paintings that are like fragments of ice themselves. They almost seem as if they too will melt away, emphasising the ephemeral nature of the icebergs, the changing glacial landscape and the urgent need to protect this environment for the sake of the whole planet.

“I am hopeful that the reduction in the use of fossil fuel during the pandemic and the increased focus on sustainable energy by many countries around the globe, will save this fragile beauty for millennia to come.” 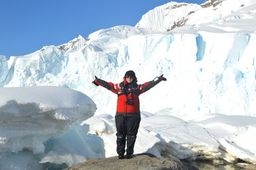 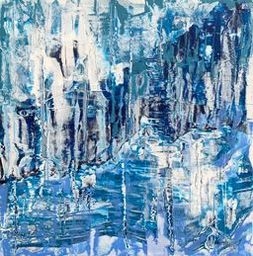 Over in Cumnor, landscape painter Sarah Bond, also inspired by a trip to Iceland, has been exploring both the power of the wind in her seascapes, the effect of climate change on the natural environment and the positive aspects of renewable energy in her art.

“The challenge of climate change, and the need to protect our environment for the future, have become key issues. Our current energy system now threatens us with a hothouse earth, renewables give us the chance to avoid that fate. In my recent pieces, ‘Winds of Change’, I create paintings that increase awareness of the positive aspects of renewable energy, especially wind turbines. I am fascinated by these gentle giants both on land and sea. They harness the power of the wind, create clean energy and the UK has a huge offshore resource. At nearby Westmill Wind Farm you are able to walk right up to the turbines. I have stood beneath the blades – sketching their white forms against a bright blue sky – and have been struck by how quiet they are, a gentle hum with the odd click. As the wind direction alters, you can see the turbines change direction and the blades adjust their angle. My aim is to capture their movement and grace while exploring how this new technology relates to the landscape as we look to the future.” 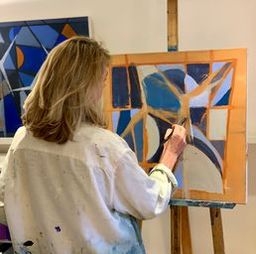 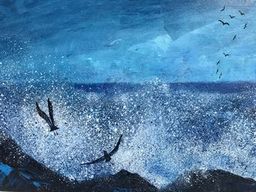 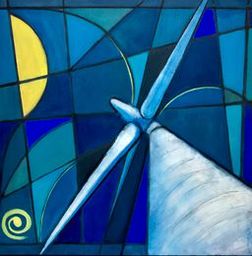 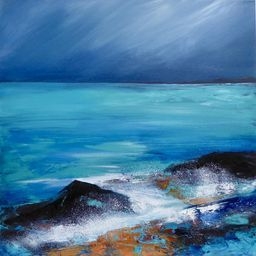 You can see more about these artists at artweeks.org