The Joy of the Cotswolds

The Art of Nadia Ryzhakova

“In Russia, it wasn’t even a question of whether you had money or not, though many people didn’t – there was nothing to buy!”

The Cult of Cinema

One of the most popular newcomers to this year’s Oxfordshire Artweeks festival, which took place in May, was Nadia Ryzhakova, an artist whose paintings are inspired by the beauty of the Cotswolds in summer, and the joy she finds here in an environment that is starkly different to the place in which she spent her childhood. 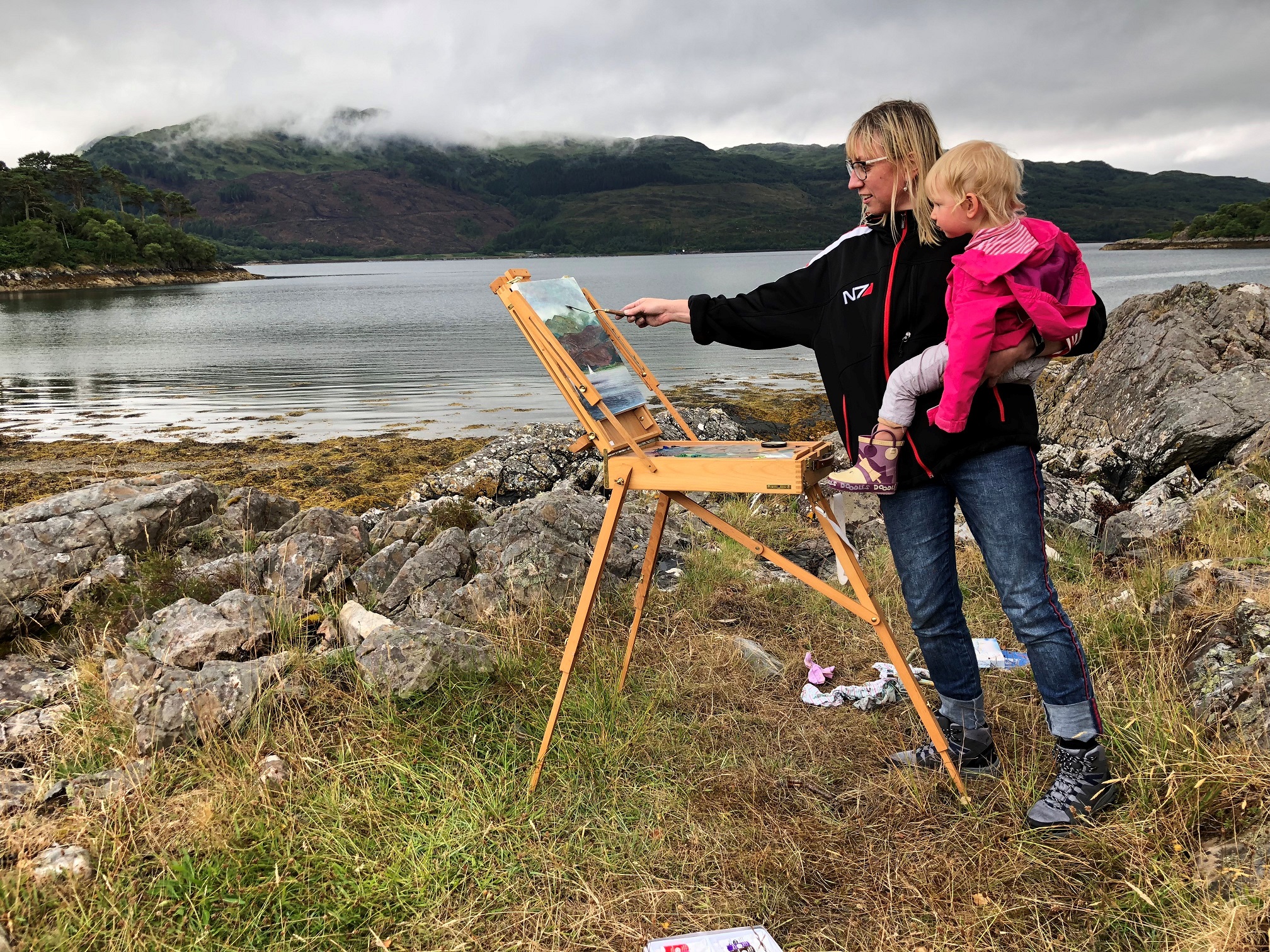 “I grew up in Tver in Russia, a small town halfway between Moscow and St Petersburg. It was a monotonous urban environment of austere tower blocks – there were no parks in the town and very little opportunity to enjoy the great outdoors. The education system too was very traditional and there was little in daily life to feed a child’s creativity – I always had a questioning mind and I remember feeling very confined. In the summer though I would spend time with my grandmother and get closer to nature letting my imagination run, fuelled perhaps by the traditional stories that were part and parcel of any Russian childhood.

“I studied art in Moscow where the focus is on monumental art – giant paintings in the built environment - including the mosaics and murals which were very popular in the Soviet era as well as icons of the Russian Orthodox Church. It was an academically strong but prescriptive approach with a focus on anatomy, and I dreamt of following my own path. 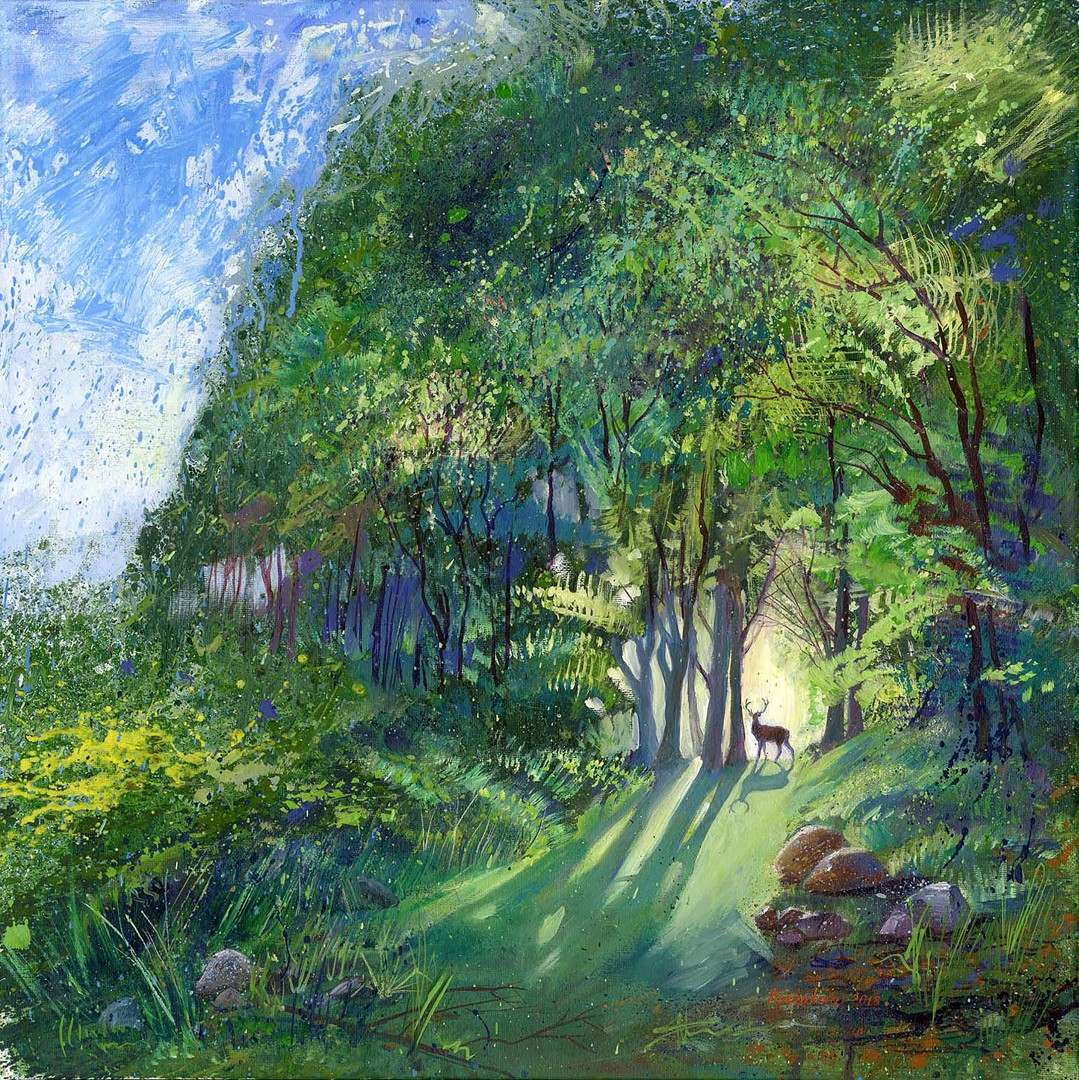 “Although there was very little opportunity in my early childhood, society was changing with perestroika and Russia’s borders became less strict in the 1990s. We began to see life outside Russia and I had the urge to see as much as possible. I also loved the idea of living somewhere else rather than just visiting it as to see life from within a place is very different from the experience of passing through – so I changed everything!

“Although I didn’t know a soul in the UK, I decided to move to London. I was amazed by it. There were so many parks that you could forget you were in a city and lose yourself in greenery right in the heart of so much history and beauty. I loved it.

“It was tough in Russia when I was growing up, and I could see that even more clearly once I could compare. It wasn’t even a question of whether you had money or not, though many people didn’t – there was nothing to buy! We had food cards restricting the amount we could buy when I was tiny but my parents had spent their whole lives in the communist era. It was my father’s dream therefore that I would have freedom and choices he’d never had, and they supported my adventure. They thought anywhere would be better than Russia! 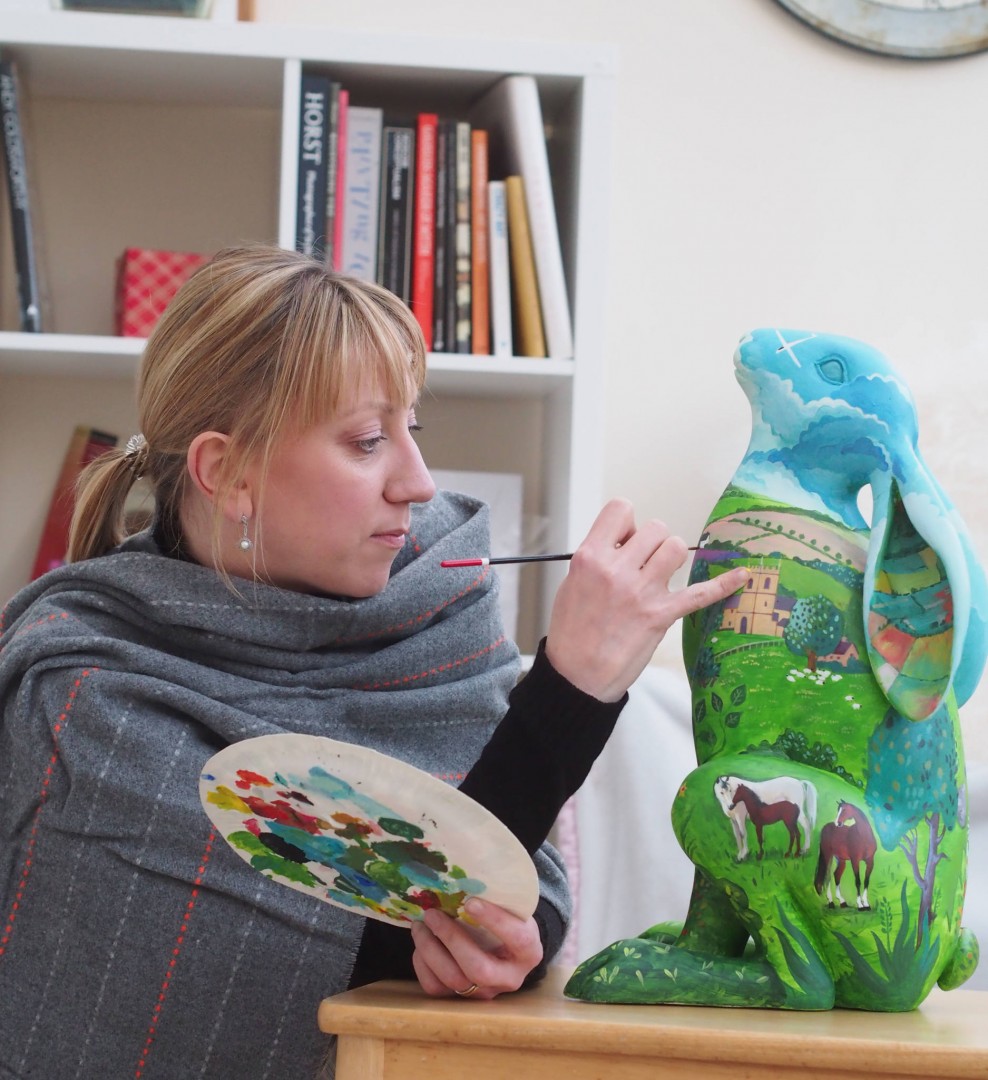 “In London I learnt English and took a Masters in Culture Policy and Management. I was then working in an art gallery and living in a small room with nowhere to paint and no room for material when I visited the exhibition of David Hockney’s art at the Royal Academy and saw his iPad drawings. That was a solution for me – I began drawing digitally and posting my work online. It became popular and led to me running a number of courses at the V&A. Although I enjoyed this phase of my art, the iPad does have limitations and it’s a very sterile media. I felt the lure of real paint; I itched for the smell and the mess!

“Coincidentally this yearning to paint in the real world coincided with a move to the Cotswolds which inspired a new approach to my work celebrating gentle green rolling hills. It was triggered by the feeling of living immersed in the countryside, and such wonderful friendly places. In Russia, the open spaces are wild and you need to be properly equipped to visit them. Here everything is so perfect, clean and neat – there’s almost a naivety about it, as if you are strolling through the idealised set of an innocent children’s TV show like Shaun The Sheep! For me, living in the Cotswolds is like living in a fairy-tale. There are many secret spots to discover and stories to uncover – I love hearing the age-old legends associated with them. Wandering in the ancient Forest of Dean, it’s as if it isn’t quite of this world, like you have stepped into another story. It is this mystical timeless flavour that I try to capture in my paintings. 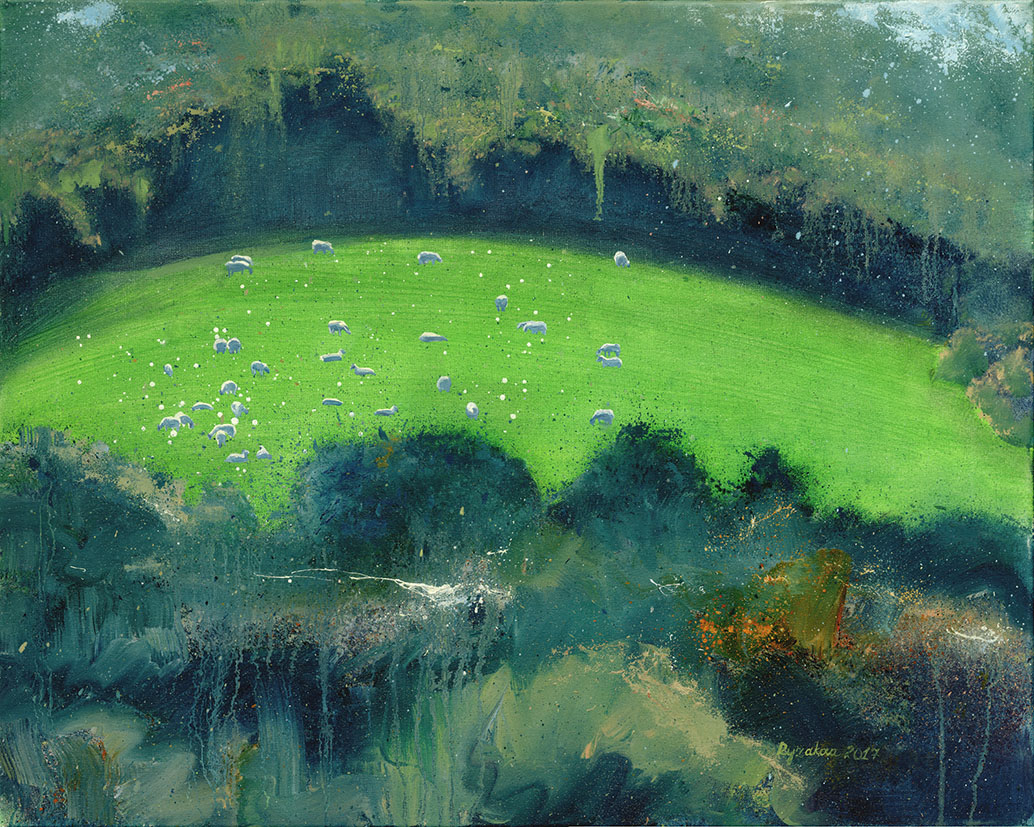 “I try and depict the feeling I get in a place rather than the actual view so I might focus on the mist rising in the early morning or the warm gentle light sunshine coming through the trees. If the background is a little hazy it leaves room for the imagination – perhaps you can only guess what’s in the landscape beyond.

“I paint how I feel about reality rather than how I see it. I am driven by an experiment with visual form. I provoke accidents to happen in paintings by making splashes of paint or letting paint flow freely on the surface of the canvas. Then out of that abstract, by placing a few details I would guide the viewer’s perception towards the idea that inspired me and let their imagination do the rest.”

Nadia generally begins by painting an abstracted landscape before adding an animal or two to populate the land and tell a story, adding an extra dimension with its character, meaning and sometimes a touch of whimsy. Painted in a peaceful Cirencester studio, the finished pieces have the serenity of classical music, and they’re a perfect view in front of which to relax this summer.

You can see more about Nadia and her art at ipainting.pro 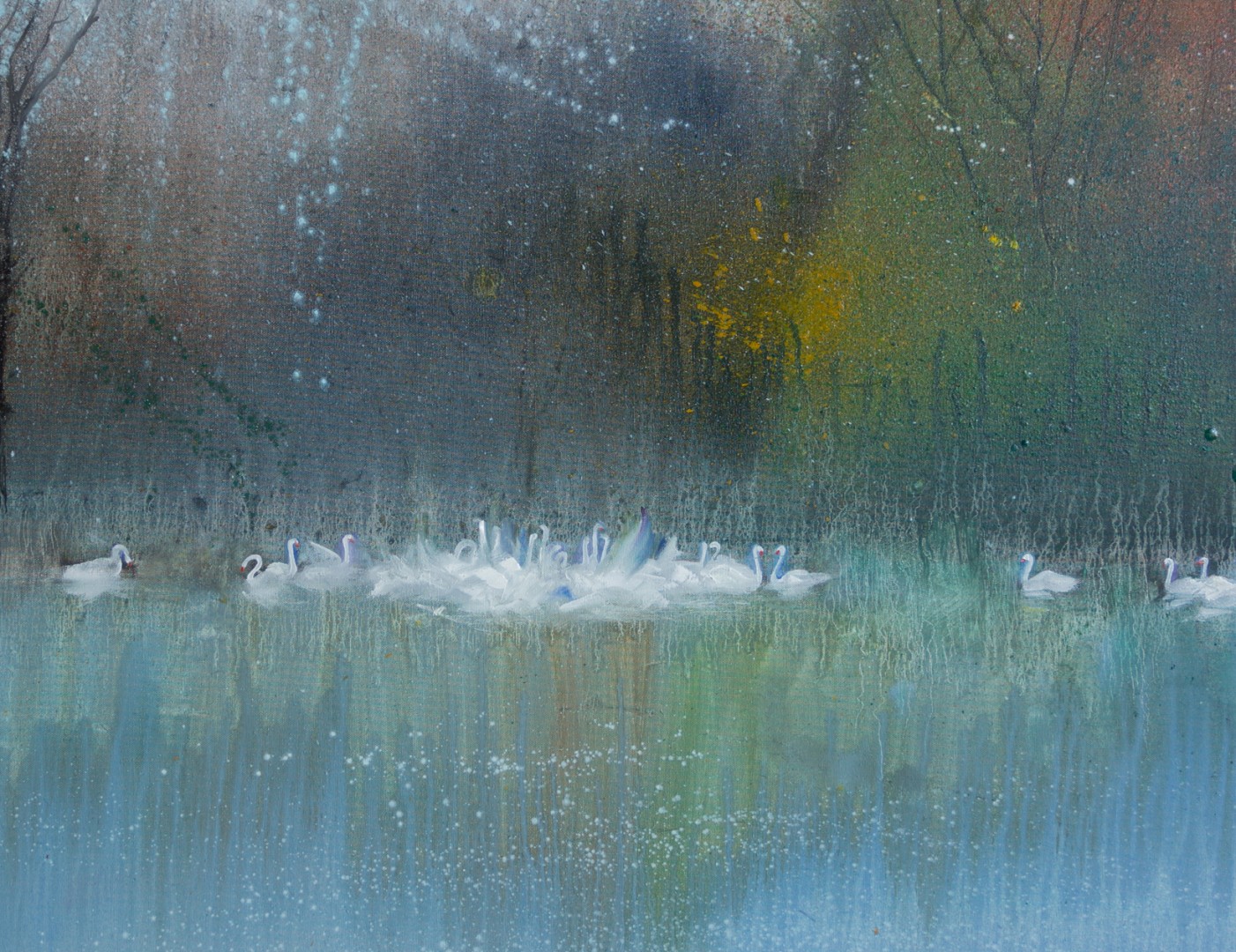 On day nineteen of the Oxfordshire Artweeks May festival see portraits, pets and people in art, craft and design.

This new exhibition from the British Motor Museum 'Factor Us In' opened on 22 July and is the culmination of a two year-project to uncover the fascinating stories behind the motor industry and of the people who worked and lived around it.

Playwright Marie Jones has shared her thoughts on the 25th Anniversary of her Olivier award-winning tragicomedy Stones in His Pockets and details on the play’s upcoming revival, directed by her son Matthew McElhinney, which will debut at the Barn Theatre in Cirencester next week.